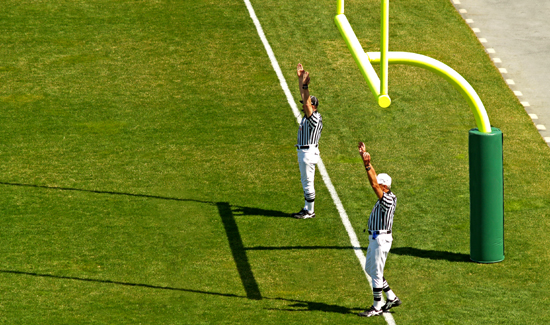 If you read American Police Beat, you might remember a story about Second Amendment activists and police officers filing a lawsuit so they could carry off-duty inside NFL stadiums at games.

But now, according to KARE News, the NFL looks like it might be winning the argument, although the matter is far from settled.

The NFL and University of Minnesota have won the latest round in a legal fight over the ability of off-duty officers to carry handguns at Minnesota Vikings games.

The state Court of Appeals on Monday overturned a ruling giving all officers the right to be armed despite objections of the league and university, where the Vikings are playing until a new stadium opens. NFL policy bans guns for all but working officers and security personnel.

The new ruling is confined to which laws apply in the dispute, not whether guns should be allowed at TCF Bank stadium.

The decision sends the case back to district court.

To all Mass shooters… Here’s an easy place for you to take a bunch of people out…. Try and stop me from carrying at my local stadium! The people who actually DO SECURITY have no problem letting me in when I show my credentials. To the people who sit in offices and on benches Monday Morning Quarterbacking, get in a police car for 8 hours, see how life on the street is, and then decide. Otherwise, the people who actually do the job will continue to do what we do best!!!!