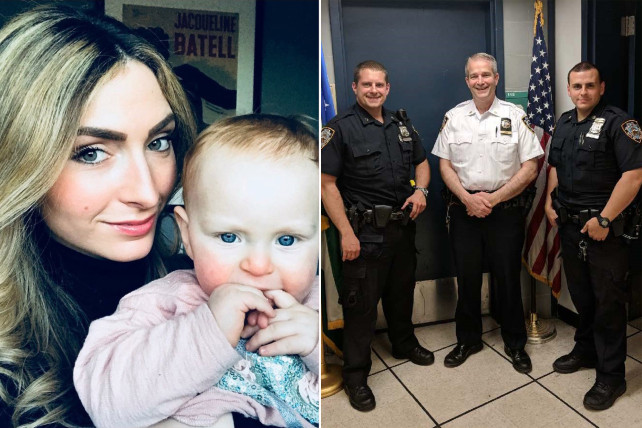 Four of New York’s Finest rushed to the rescue of a baby girl suffering a seizure Saturday night in Brooklyn, pulling the tot back from the brink, according to her grateful mom.

Caroline Ivanov was celebrating her mother-in-law’s birthday at a restaurant near Ocean Parkway and Brighton Beach Avenue around 7:10 p.m. when her 15-month-old, Chloe, suddenly started convulsing, became breathless, and turned blue.

“This is my first child, my only child, and I’m watching her go lifeless in my arms,” said Ivanov, 29. “Obviously I’m terrified.”

Ivanov dashed out of the restaurant screaming for help, spotted a 60th Precinct police car stopped at a red light, and ran over, frantically pounding on the window for help.

Officers Michael Pace and Joseph Doyle, both 26, quickly radioed for an ambulance.

Now joined by Newman and King, Pace returned to the radio to ask how far out the ambulance was.

The reply was seven to eight minutes — time the cops decided that young Chloe couldn’t spare.

“Instead of waiting for an ambulance, they rushed her straight to Coney Island Hospital,” said Ivanov. “And honestly, if it wasn’t for them, I don’t know if I would be holding my daughter right now.”

The four cops plus the Ivanovs sped off in the patrol car towards the hospital, with Newman performing CPR on Chloe in the backseat.