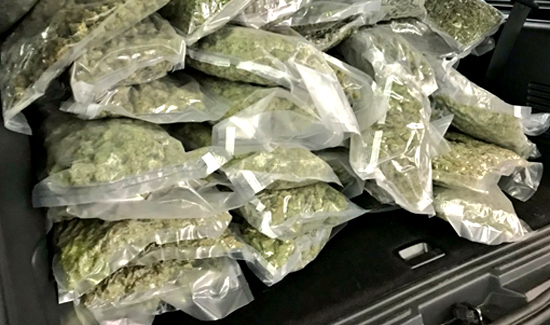 (Courtesy of the Indiana State Police)

Greenfield, IN – Yesterday an Indiana State Trooper pulled over a 2017 Ford Expedition for a traffic violation on I-70 near Greenfield. The trooper later discovered more than 78 pounds of marijuana inside the vehicle.

At around 11:00 a.m. a Trooper who was patrolling I-70 in Hancock County noticed a black SUV weaving outside the traffic lanes. A subsequent traffic stop and investigation revealed a large amount of marijuana inside. The vehicle was driven by 51 year old Christian Elie of Elbert Colorado and there was one passenger, 42 year old Austin Johnson of Indianapolis. Both men were arrested and transported to the Hancock County Jail on preliminary drug charges.

This is an ongoing investigation, troopers will work with the Hancock County Prosecutor’s Office to determine formal charges. The street value of the marijuana is estimated to be around $250,000.

You can report Illegal drug activity occurring in your area by calling the Indiana State Police Drug Tip Line 1-800-453-4756.

All suspects are considered innocent until and unless proven guilty in court.

At the time of this release mug photos of the suspects were not yet available. They will be released upon availability. 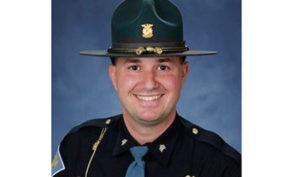 Check out the funny Tweet from Sgt. John Perrine here.