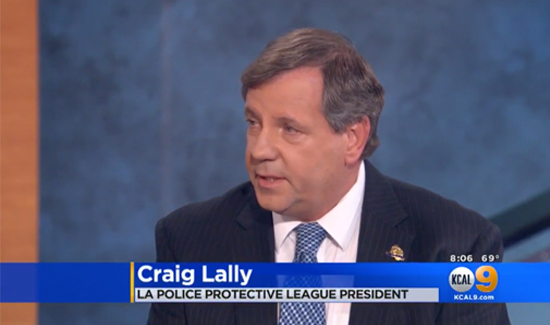 Police union leaders are condemning the use of the “thin blue line” by hate groups and extremists. The symbol and phrase were originally created for communities to show their support of law enforcement officials.

In a statement released Monday, The Association for Los Angeles Deputy Sheriffs (ALADS) in a statement on Monday joined with the United Coalition of Public Safety (UCOPS) to denounce extremists. According to a report by Mercury News, police union leaders are speaking out in a statement, strongly opposing the use of the symbol for anything hateful or terroristic.

“I’ve seen photos, and I’m seeing it on television through the news,” said Robert Sass, vice president for ALADS and a deputy for the Los Angeles County Sheriff’s Department. “Some of the hate groups are draping themselves in the flag. Some are carrying flags. Those flags refer to the ‘thin blue line’ that police officers use to symbolize police work. It’s something that’s been around for quite awhile and is used by police officers.”

Those attempting to hijack the symbol for other purposes (“hate groups such as the neo-Nazis, White Supremacists or the KKK”) are “despicable and most certainly do not represent the values for which that symbol stands,” the joint statement said.

The Los Angeles Police Protective League has also expressed their opposition of misuse of the symbol by hate groups, “especially those that commit violence or advocate violence to achieve their own repugnant political agendas,” said LAPPL president Craig Lally. “Whether they’re neo-Nazis, white supremacists, the KKK, anti-Semites or Antifa, we repudiate their beliefs and their tactics.”

Lally’s statement also encouraged anyone who feels the need to create or attend a protest or demonstration that will mirror the recent events in Charlottesville, to just stay home.

“We urge them to look into their souls and try to figure out where their hate is coming from and seek professional help,” Lally’s statement added. “No one is born hating other people,” he said.

The bottom line is simple, according to Sass.

“Frankly, it’s kind of horrifying to see the photos of hate groups of neo-Nazis and white supremacists and the KKK draping themselves in these flags. They don’t represent what we stand for as police officers, and it’s just appalling they’re carrying these flags and using them in that manner. I would hope they think this isn’t their symbol. It just shows support for law enforcement. I would love to see these hate groups stop using the flags,” he said.

Brianna Dunn is a staff reporter at American Police Beat.

Per the U S Flag code, You do NOT alter the flag PERIOD.
Drop the gang colors and leave the American flag Alone.
Follow the U S Constitution and support Americans and the Americans will support you.