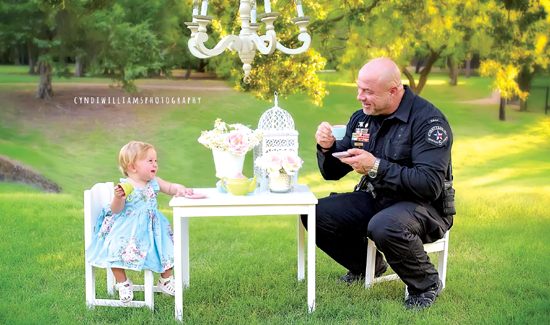 Texas police officer Deputy Constable Mark Diebold was on his way to work last year when he noticed a car that had passed him driving well over the speed limit. At the next light, Caleb Hall rolled down the window at the next traffic light to alert the Tarrant County police officer that his wife’s water just broke.

A few minutes later in the parking lot of a gas station, Diebold helped Caleb and his wife Destiny deliver a baby girl.

Since the birth of the Hall’s daughter Evelyn, Diebold’s been kind of like a favorite uncle.

He even got invited to Evelyn’s first birthday tea party.

“It was amazing,” Diebold told ABC News about taking the photos.

“It was heartfelt and it was a big deal. That photo shoot reminded me that police work is what I need to keep doing until it’s my time to stop.”

And here’s a note from the photgrapher Cyndi Willaims: