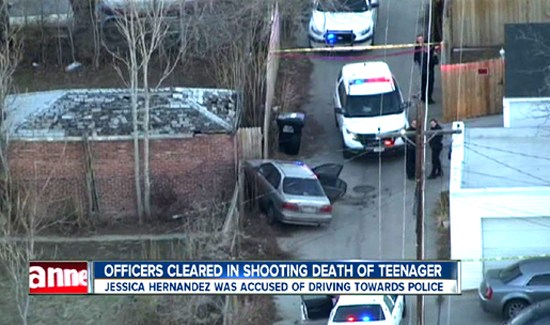 Denver police on Monday expressed sympathy to the family of 17-year-old Jessica Hernandez but said no punitive actions will be taken against the officers involved in shooting her to death.

A statement issued by police Chief Robert White came three days short of the two-year anniversary of the shooting of Hernandez, who had been behind the wheel of a stolen car in an alley in the Park Hill neighborhood.

A statement from Hernandez’s family said they had received a call from Mayor Michael Hancock, “who expressed compassion as he conveyed the results of the Police Department’s internal affairs investigation.”

“The family has expressed to Mayor Hancock their appreciation for his willingness to grieve and pray with them,” the statement said. “Nevertheless, the Hernandez family will achieve justice for Jessie and continue to advocate for meaningful police reform.”

Both officers — Daniel Greene, a 16-year Denver Police Department veteran, and Gabriel Jordan, a nine-year veteran — were placed on administrative leave at the time of the Jan. 26, 2015, shooting.

Hernandez was in the car along with other teens when police were called just before 7 a.m. on a report of a suspicious car. The officers said Hernandez drove the car at them, accelerating.

In June, Denver District Attorney Mitch Morrissey decided to forgo criminal charges against the officers, saying they were justified in shooting because it was reasonable to assume Jordan’s life was in danger.

White’s statement Monday noted that Morrissey declined to bring charges and that the FBI had found no evidence of a federal civil rights violation.

“After reviewing the facts and circumstances of the shooting death of Ms. Jessica Hernandez, it has been determined that the officers involved in the incident used appropriate force in compliance with the departmental policies and procedures that existed at the time of the incident,” White said in the statement. “Nonetheless, this incident is a tragedy for all involved. Ms. Hernandez had her whole life in front of her and we mourn her loss with the family.”

The statement said the police department “places great value on the sanctity of life and mourns with the community when a life is lost tragically.”

The shooting of the teen fueled outrage in the community concerning police response and tactics.

The Denver Police Department has since changed policy on shooting at moving cars. Officers no longer are allowed to shoot at a moving car unless someone inside is firing at them.