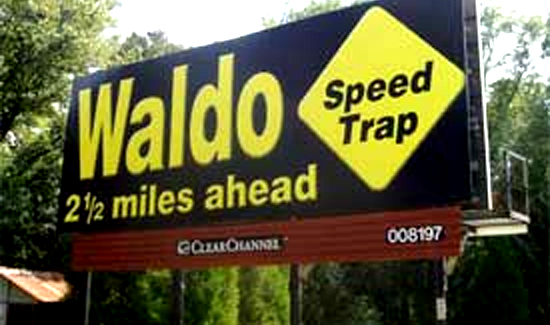 According to local media reports, the Waldo (Florida) Police Department will close its doors and all five officers working there will be let go.

The Waldo City Council voted 4-1 recently to disband the police department. They have outsourced policing services to the Alachua County Sheriff’s Office.

The small town police department has been featured in national news after allegations of the agency using speeding ticket quotas became the subject of state investigations.

In 2012, Waldo was ranked #3 in a National Motorists Association listing of its “Worst Speed Trap Cities.”

Officer Roy Steadman and his wife Christina said they’d move on and focus on finding work for Roy elsewhere.

“We’ve got two girls at the house and one of them is chronically ill and that throws this a little,” Roy Steadman told reporters with News4JAX.

“Losing the jobs and losing the benefits will be a hard hit for us.”

Back in August, Waldo’s police chief was suspended after officers blew the whistle and accused him of having a ticket quota. That’s illegal in Florida.

The officers claim they were ordered to write 12 tickets per 12-hour shift or face retribution of some kind.

A spokesperson with the Alachua County Sheriff’s Office said details about the change in police service are currently being ironed out.