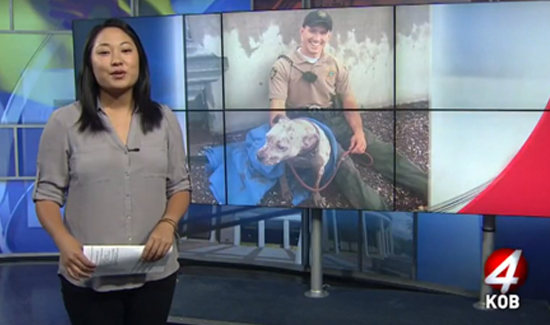 A New Mexico woman involved in a car crash was fortunate to have survived—and even more fortunate that members of the Bernalillo County Sheriff’s Department sprung into action to rescue her beloved dog, which was trapped in the wreckage.

“If you saw the accident, you would wonder how in the world they survived out of that,” said Mark Chavez, who was working at home in Carnuel when he heard the crash. “About maybe four or five minutes later, I heard another crash, and I said, ‘hmm that’s not right.’”

Two cars had lost control, gone off I-40 and through a fence off into a 12-foot creek.

“Everybody was pretty shaken up,” said Deputy Isaiah Bryce.

But one woman was especially upset.

“Just seeing that look on that lady’s face,” explained Chavez. “That dog was her life.”

She made it out safe, but her dog was still trapped under her car.

“It was either get the dog out right away, or he’s probably going to drown,” said Deputy Bryce.

So three deputies, a sergeant, and a bystander hopped into the creek.

“These guys are digging feverishly,” said Chavez. “Trying to figure out how to get in there.”

They tried shaking the car to get the dog out from underneath.

“She wanted her dog,” said Deputy Bryce. “Her dog meant that much to her. She didn’t care about her injury. She wanted the dog.”

The tight space made it even harder for them to move the car just enough to rescue the dog.

“They really went out of their way, got down there,” said Chavez. “Got dirty. All mud. It was raining.

Fifteen minutes later, they managed to tilt the car just enough for the dog to shimmy out.

“If it was my family, my dog, I would expect somebody to help me out and do the same thing,” said Deputy Bryce. “So at the end of the day, we’re all family. So we gotta help each other out.”