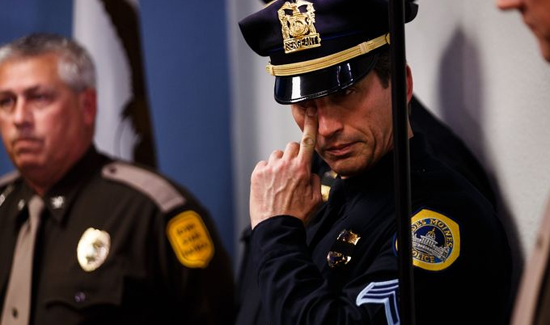 Via the Des Moines Register:

Police from Urbandale and Des Moines departments responded to a report of gunfire at the intersection of 70th Street and Aurora Avenue at about 1:06 a.m.

The first officers arriving on the scene found an Urbandale officer shot. The officer, whose name has not been released, died, said Des Moines Police Sgt. Paul Parizek in a news release.

At about 1:26 a.m., a Des Moines police officer was shot and killed near the intersection of Merle Hay Road and Sheridan Avenue while responding to the scene where the Urbandale officer was shot.

Both officers were gunned down in their patrol cars.

The police departments are wary of officers’ safety, as the attack appeared targeted at officers. Des Moines Police has paired up its patrol officers so no officer is on patrol alone, Parizek said.

“There’s literally a clear and present danger if you’re a police officer,” he said.

As of a 5 a.m. press conference, police were still notifying the family members of the slain officers and planned to withhold the officers’ names, years of service and other details until later in the day, Parizek said.