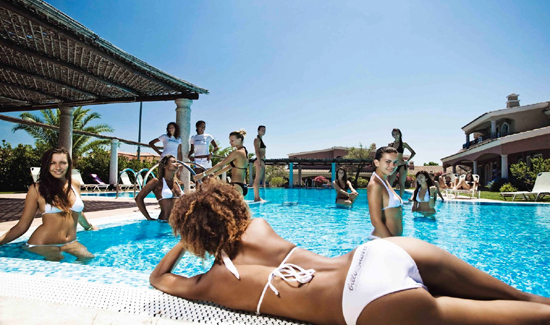 The Dodgers were barred from entering the pool at Chase Field following Monday’s 3-1 win over the Diamondbacks in Game 3 of the National League Division Series. Shortly after the game ended, the Diamondbacks sent police mounted on horseback out near the pool to keep the Dodgers from going for a swim.

The Dodgers weren’t able to take a dip in the water, so they settled for being drenched in champagne. That’s exactly what they did.

The Diamondbacks were hoping to prevent a repeat of 2013, when members of the Dodgers hopped the outfield fence and celebrated in the team’s pool after clinching the National League West in Arizona. Willie Bloomquist, who played for the Diamondbacks at the time, called the move “classless and disrespectful.”

The whole saga was taken to another level shortly after, when a report came out suggesting members of the Dodgers had urinated in the pool.

This is not the first time the D-Backs have installed security to protect the pool. In 2014, a fan dressed as Poseidon vowed to keep opposing players out of there. That may have just been a passionate fan, and not someone employed by the Diamondbacks, but it was certainly a lot more fun than this.

In 2017, the pool is restricted to Diamondbacks only. When the team clinched a playoff spot in September, they celebrated with a dip in the water.

While the Dodgers may have been disappointed with that development, it’s tough for them to be too mad. The team can now rest for a few days and watch as the Chicago Cubs and Washington Nationals duke it out to join them in the NLCS.

For the Diamondbacks, well, keeping the Dodgers from celebrating in the pool can be viewed as a moral victory. Unfortunately for them, that’s the only kind of victory they were able to achieve Monday night.