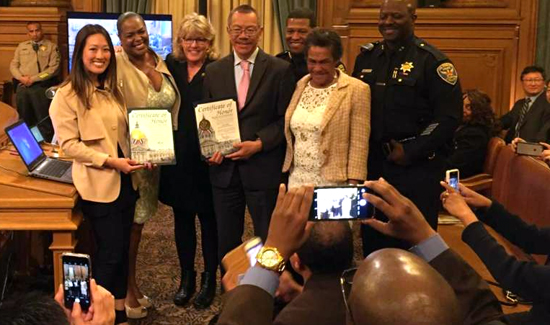 San Francisco emergency dispatcher Janet Atchan was in the last hour of a 12-hour shift when she got the call she and her colleagues fear most.

Atchan, 46, drew on her 25 years of experience as a dispatcher as she mobilized emergency crews and backup police officers to the scene, and even took calls from witnesses with tips on the suspect’s whereabouts.

On Tuesday, Atchan was named Dispatcher of the Year for staying cool under pressure and helping to save San Francisco Police Officer Kevin Downs’ life after he was shot in the head following a confrontation on Oct. 14 at the Lakeshore Plaza Shopping Center.

“Your adrenaline goes from 0 to 100 and it’s scary, it’s a lot of confusion. You just can’t believe it’s real,” Atchan said. “I’m happy the officer is recovering very well.”

She also received a special commendation by supervisors Katy Tang and Norman Yee for her response.

“We are so grateful that people like Janet are there to calmly handle all the emergency situations that arise in the City. Emergency dispatchers work hard behind the scenes, and often times their work goes unnoticed,” Tang said in a statement to The Chronicle.

Atchan received a call about 8:15 p.m. that seemed routine, “a man was acting erratically at a shopping center,” said Francis Zamora, a spokesman for the city Department of Emergency Management.

Within minutes, the situation escalated.

When police officers got to the shopping center on the 1500 block of Sloat Boulevard, a security guard pointed them toward the suspect on Everglade Drive, and the man immediately fired multiple shots, striking Downs in the head, police said.

Downs survived the incident and police officials say it was due to Atchan’s speedy coordination in dispatching emergency crews.

“We are just very grateful and thankful that she maintained her professionalism and did her job,” said Officer Giselle Talkoff, a spokeswoman for the San Francisco Police Department. “We are very thankful that she was there and helped out.”