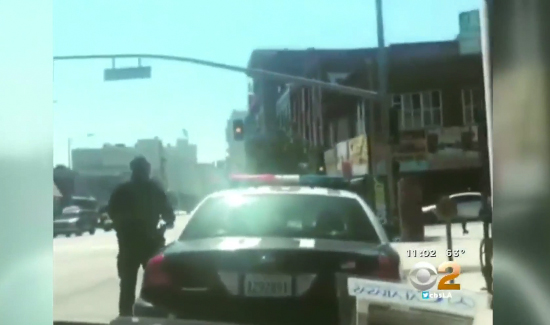 A disturbing video that seemingly shows an officer being stalked has the local law enforcement community on edge.

The footage, posted on social media, begins with a Los Angeles police officer getting out of his patrol car, followed by a shot of a handgun held by the person shooting the video.

That individual was recording the video from inside a car parked behind the officer.

The video, which had gone viral, is enough for the wife of an L.A. police officer to think someone may be sending a threat. “It’s completely frightening, and I know that a lot of the wives are scared,” she said.

She is part of the LAPD Wives Association. Many of the members have seen the video, and so have many officers.

“They just want to do their job and yet all this hatred is coming at them. And it’s becoming more and more violent,” she said. “They are so scared that their husbands are not going to come home.”