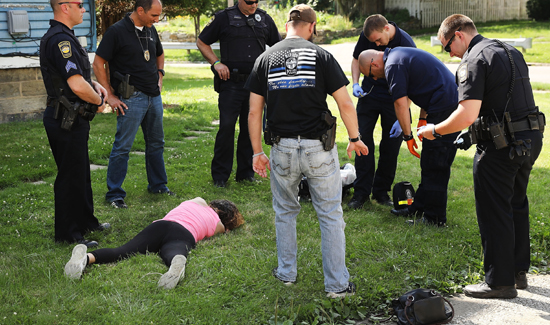 Via The Los Angeles Times:

President Trump emphasized the need for stepped-up law enforcement to combat the nation’s opioid problem Tuesday, an approach that is at odds with a report released last week by the special commission he appointed to address abuse.

“Strong law enforcement is absolutely vital to having a drug-free society,” Trump told reporters from the clubhouse of his golf club here.

“I have had the opportunity to hear from many on the front lines of the opioid epidemic, and I’m confidant that by working with our healthcare and law enforcement experts we will fight this deadly epidemic and the United States will win.”

He also sought to cast blame on the previous administration for the worsening of the opioid problem.

Eager to convey a sense that he is working during his two-week stay in New Jersey, the president and First Lady Melania Trump met with Health and Human Services Secretary Tom Price and other top aides to discuss the opioid crisis.

At least he is attempting to do something…..unlike his predecessor, who used cocaine.