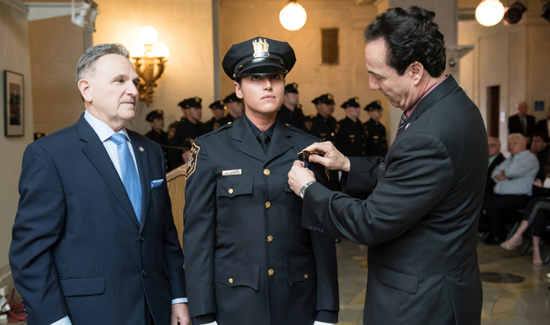 Kristen Hyman, of Bayonne, was suspended from the sheriff’s office days before graduation. A judge quickly reinstated her and Hyman now awaits a disciplinary hearing later this month to determine her fate with the department.

In the interview with the Post, Hyman said she was struggling to make money as an actress and model. Someone suggested she try bondage videos because she could make a “good wage.”

Her attorney James Lisa suspects Hyman’s ex-boyfriend may have tipped the department off about her past, according to the report. Hudson County Sheriff Frank Schillari said disciplinary action was appropriate to “protect the integrity of the department” and to prevent her from taking an oath of office “for which she is not entitled.”

Why is she not entitled?
She passed the background check and she did NOTHING ILLEGAL.
Would she be in the same position if she did a violent movie?
While bondage might be for you (it is not for me) but it a legitimate.
There are just so many variables to this.
Again she passed the academy as required, she passed the physical and classroom studies, so why?
You have had people in the academies with criminal charges (in 1986 with three weeks before graduation a member of my class was arrested on a warrant for a homicide he did in Georgia. If he beat the charges would he be allowed to return?
I am just saying the punishment should fit the crime…
And this is not the answer.
Peace
Larry R.
Retired PO