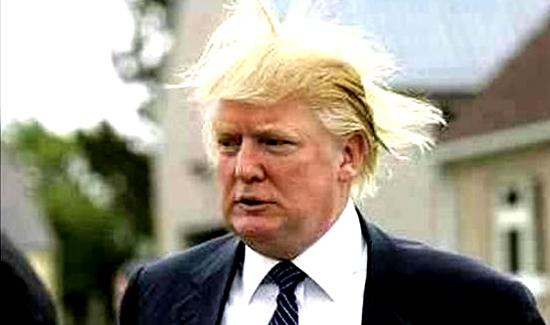 He makes the rest of the 2016 presidential hopefuls look downright impressive by comparison—and that’s really saying something, considering the field.

After telling the world that Mexicans are rapists and that pretty much everyone but him is a loser, the Donald has run into a little bit of a rough patch.

First, he screwed up his own beauty pageant by pissing of so many Latinos that there’s a real possibility Spanish–speaking contestants and performers will boycott.

Then he got fired from NBC, the network that aired his unwatchable reality show that ends with The Donald telling people “you’re fired!” from their fake jobs.

Now Trump’s weighing in on the complex and nuanced world of American public safety.

As usual, his comments are designed to sell newspapers and generate web traffic.

Trump’s advice to cops under the microscope is simple: “You can’t be so gentle with these people.”

The billionaire says cops are all too scared to do their jobs, and if he was in charge, he’d have the whole thing straightened out in a New York minute.

Who knows, he might be better at public safety consulting than he was at marriage or staying out of bankruptcy court.

But people like the Donald are very lucky to live during a time when the loudest—and frequently dumbest—voice is, for whatever reason, something people find entertaining.

Typical rhetoric from a privileged pos…

Trump has my vote. What a twisted spin the author of this article has.

He said some things that he definitely should not had said. On other issues he can bring this country back together. He’s very smart when. It comes to budgeting our money. He needs to understand that the mexicans that are sneaking in , they need jobs. I work with some. They are leaving because the cartels are killing alot over there. In a since they need our help. I don’t see them taking job away from us
.

Hes the only candidate I’ve seen show any concern for officers at all. Maybe that will spread at some level?

trump is lost in the land of oz, he knows he is not in Kansas anymore . he is trying to find the wizard for a brain courage and a heart , how does he plan to deport 11million plus illegals and some 8 million other illegals not considered Mexican how will he build a wall if we have a trillion dollar debt .our borders wont be secure until all his rich friends stop using low pay labor , I can just imagine legal americans running to get all these jobs washing dishes cooking housekeeping ect.we wont need Obama care welfare will be for legal americans . no crime in our streets all the rapist killers and drug dealers will be back in mexico police will once again feel safe thanks to trump.