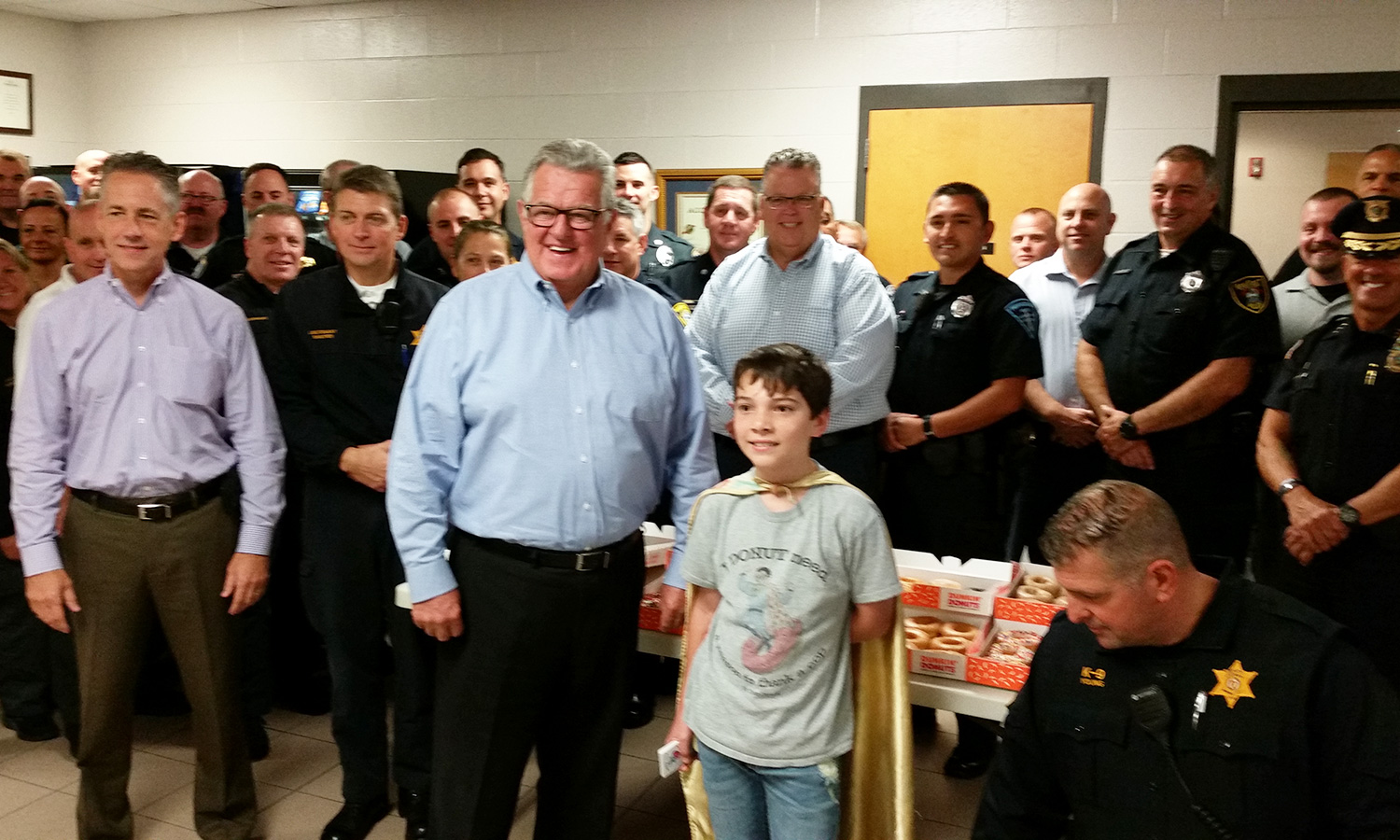 Law enforcement from across Cape Cod received a special visit Wednesday from Donut Boy at the Barnstable County Sheriff’s Office in Bourne.

Tyler Carach, 10, from Florida, passed out donuts to deputies and officers from several local police departments.

It started when he asked his mother if he could buy mini-donuts with his allowance money for four deputies.

Tyler said it is important to thank police for the work they do.

“The police officers risk their lives for strangers and their families so I wanted to thank them for what they did,” he said.

Tyler and his mother were invited to the Cape after a Barnstable County Sheriff’s Office Lt. Kevin Fernandes met them at an airport and invited them here.

County Sheriff James Cummings said Tyler brought some happiness to local law enforcement after a tough year in the region with the death of Yarmouth Sgt. Sean Gannon and the non-fatal shootings of two Falmouth officers.

“It kind of shows that there are, and I think a lot more than we really realize, folks who are out there who support law enforcement,” Cummings said. “We were glad to be able to do this today and bring all of these guys and gals together.”

Cummings said Tyler is a sharp young man who really has it together.

“What an education to have been in 40 states already so I hope he is learning something in every state,” Cummings said. “We are glad he is here in Massachusetts.”

During his visits with law enforcement, Tyler wears a donut themed Cape made by his grandmother that reads “I Donut Need A Reason to Thank A Cop.”

Tyler travels across the county to visit police with his mother, Sheena Carach.

She said it is unfortunate that there are some people who judge all police officers based on the actions of a few.

“Because they do that, sometimes they are not very nice to police officers and have even hurt and killed police officers for no other reason,” she said. “And [Tyler] looked at me and said, ‘I’m going to thank every cop in America and buy them a donut.”

Tyler was persistent in his quest and the family started by thanking officers in Florida before branching out to dozens of other states.

Tyler and Sheena will travel to Maine Thursday before heading to the Pittsburgh area in Pennsylvania before returning home on Sunday.

The longest trip they have made has been six weeks straight.

Sheena said they plan to keep going even after they make trips to all 50 states.

“We just hope to see this get bigger and better,” Sheena said.

They are currently working on getting 501(c)3 non-profit status.