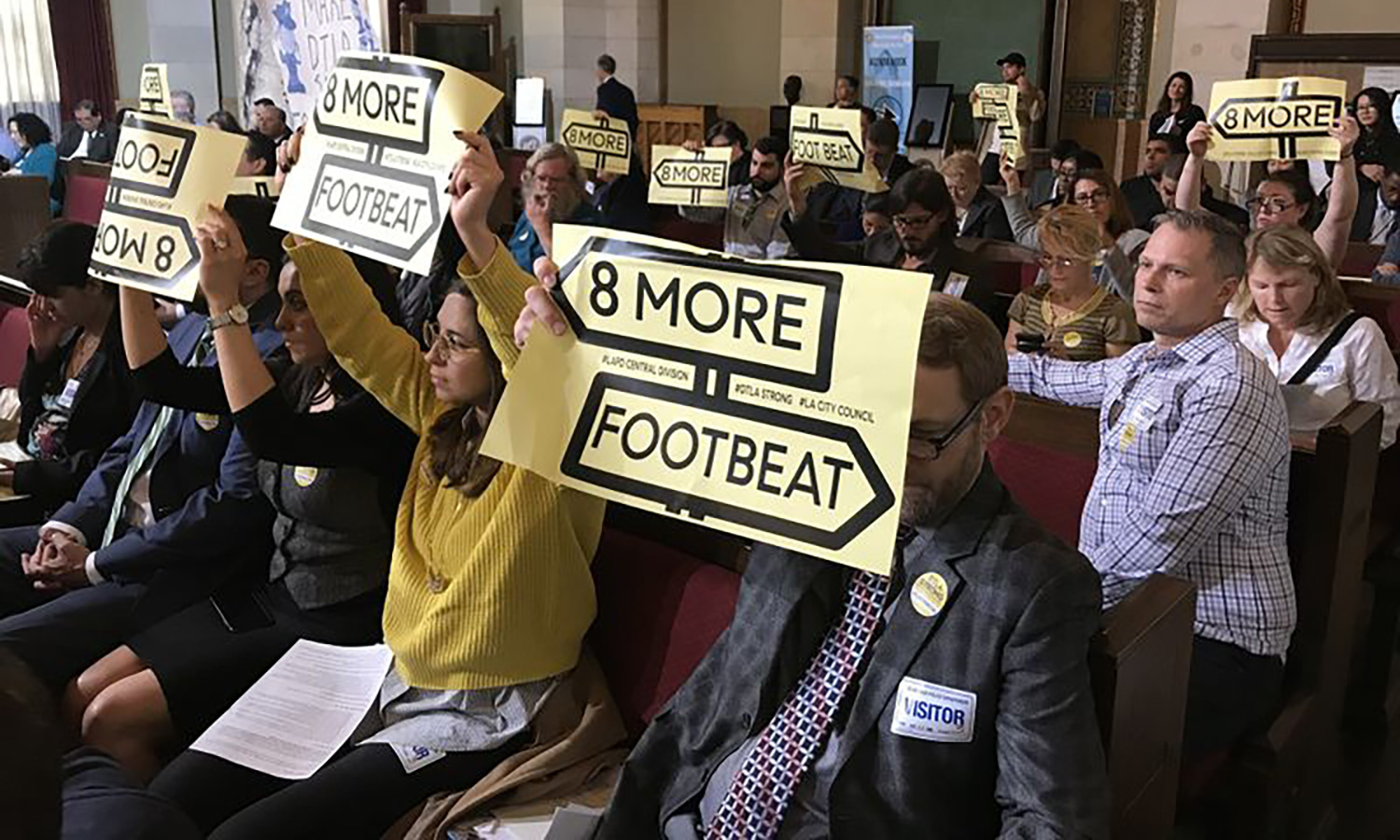 Dozens of downtown residents went to Los Angeles City Hall on Thursday to demand more foot patrols in their neighborhoods, saying they are frustrated by the number of assaults, open-air drug sales and incidents of harassment outside their homes.

More than 50 people affiliated with DTLA Strong, a neighborhood organization formed last year, appeared at the council’s Budget and Finance Committee to request the patrols on Broadway, Spring, Main and other major streets. Several said downtown has become increasingly unsafe.

Catherine Tomiczek, who lives at 7th and Spring, said one of her friends was beaten and robbed on Main Street, while another was body slammed near 7thand Grand. A neighbor in her building, she said, was stabbed and hospitalized with a punctured lung — and ultimately moved out of the neighborhood.

“Everyone living, working in, or visiting downtown has noticed the rapidly deteriorating conditions,” she told the committee.

Police Chief Michel Moore, who appeared later in the day, said the LAPD division that covers downtown has 414 sworn officers — the largest number in the city, up from 404 in 2016.

Still, he acknowledged that downtown and other key parts of the city have grown in population, and merit a fresh assessment of deployment decisions.

Crime data posted by the LAPD’s Central Division through April 13 said major crimes have increased6.7% so far this year, compared with the same period in 2018. Aggravated assaults have risen 2.2% over the same period, according to the posting.

DTLA Strong, which describes itself as a group focused on addressing downtown problems, submitted a petition with more than 1,700 signatures calling for additional LAPD foot patrols, saying they are needed to match the increased population. Over the past two decades, dozens of residential buildings have opened — some new, others converted from old office buildings or other uses.

Councilman Paul Krekorian, who heads the budget committee, said he would request the information sought by Hernadez’s group.

During Thursday’s daylong meeting, the committee also heard complaints from downtown workers and business owners about public safety incidents. They said the council needs to treat rising crime as an urgent issue in downtown.

“I’ve been assaulted. I’ve been spat on. I’ve been threatened with death by random passersby on the street,” said transportation planner Tyler Lindberg, who lives in Koreatown but works downtown. “I know friends who can’t wait till their lease is up so they can move out of downtown.”

Some residents said such incidents had caused them to change their behavior.

“Now, when my family comes to visit, I will not let my mom walk out of my loft alone,” said Bobbi Kaelin, a benefits consultant who resides at 3rd and Broadway.

Moore said an outside consulting firm is conducting an analysis of citywide deployment, with a first draft expected in September. Downtown, he added, already has seven foot beats four to five days each week.

“I’ll not argue that we could not use more,” he said. “It’s just a matter of where those more come from.”