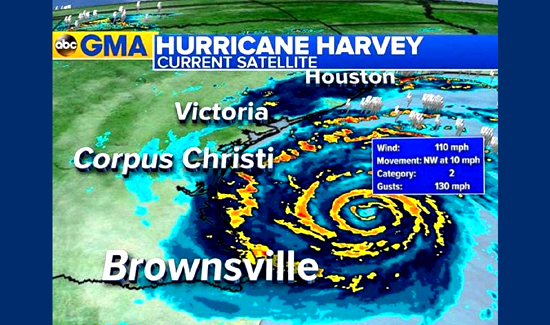 Helicopter rescues took place throughout Houston over the weekend after Hurricane Harvey dumped enough rain to cause catastrophic flooding.

One such rescue was caught on video by local ABC News station KTRK. The footage showed a woman and child who were rescued from floodwaters and transferred to safety.

Helicopter crews from the Texas Department of Public Safety were deployed to airlift flood victims stranded on rooftops, in cars, on vessels and in other life-threatening situations. Officials told The New York Times that the Coast Guard also sent 14 boats and seven helicopters to Houston.

Another video posted to Twitter showed a father named Jeremiah and his 6-year-old son as they were airlifted to safety. The father and son were able to reach a rescue helicopter after climbing out of a second-story window when their home flooded.