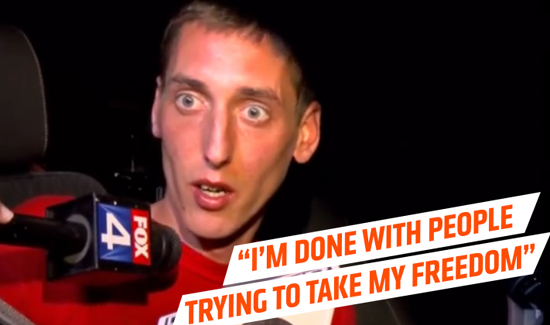 One of the reasons people like the reality show “COPS” is the fact that it’s one place where you’re guaranteed to get a close-up look at the shallow end of the gene pool.

If it isn’t two shirtless guys fighting over the last beer, it’s a dude with a broken arm smoking a joint in the emergency room.

But there’s a new kid on the block as far as “dumb crooks,” and he was recently given his five minutes of fame after leading police in Texas on a car chase that lasted forever.

Here’s what the kid said, but make sure you watch the video to get the full effect:

“Dude, I was trying to get to San Antonio. I don’t know what the [bleeped out] roads I was on until they shot my car. I didn’t know they was going to shoot at me. I was like, “Damn, they shooting at me—I ain’t even got no gun.”