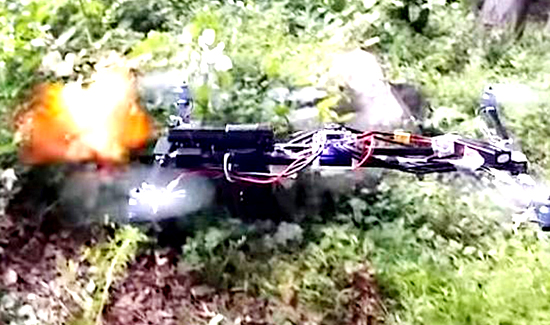 For instance, a Connecticut teen recently became an overnight sensation after he successfully weaponized his commercially available drone with a handgun.

Surely there must be some rules about this kind of thing, right? Certainly in “post-9/11 America” people can’t lawfully weaponize drones and send them out willy nilly.

Police in the kid’s hometown of Clinton say they can’t find anything to charge him with.

“It would seem to the average person, there should be something prohibiting a person from attaching a weapon to a drone,” Clinton Police Chief Todd Lawrie said in a statement cited by WTNH, the ABC affiliate in New Haven. “At this point, we can’t find anything that’s been violated.”

One law enforcement expert believes the only hope of filing a charge in these cases would be reckless conduct. And that’s a long shot.

“What if the drone gets beyond the distance of the radio control?” Tom Fuentes, a former assistant director of the FBI, told CNN Wire. “Do we want drones out of control that could land who knows where? We could have a child pick up the drone, pick up the gun, and accidentally kill themselves.”

Haughwout’s father told NBC Connecticut that the gun belongs to him and said his son did “extensive research” to ensure it didn’t break any laws.

“Homemade multi-rotor with a semi-automatic handgun mounted on it,” the description on YouTube reads. “Note: The length from the muzzle to the rear of the frame is over 26″.”

The reference to the length may be an attempt to comply with federal law governing overall length of rifles.

The FAA is now involved but it’s unclear if this will be perceived as a big government crackdown on individual liberty—which could gum up the works as far as filing charges.

The critical part is obviously the fact that those who hold grudges against police—such as the recent Dallas Police Headquarters shooter—don’t have to worry about risking their lives by engaging officers in gun battles.

They can do it by remote control.

And right now there’s nothing on the books that would prevent a Dylan Roof (Charleston) or a Mohamad Youssef Abdulazee (Chattanooga) from preparing extensively for an attack using commercially available drones and firearms.