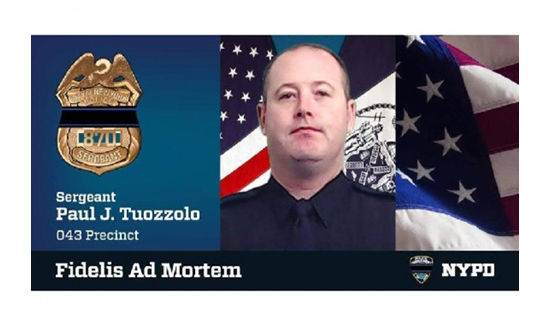 Ed. note: We wanted to share this moving eulogy delivered by Ed Mullins, president of the NYPD Sergeants Benevolent Association, at the funeral for Sgt. Paul Tuozzolo, who was killed in the line of duty saving the life of his partner, Sergeant Manny Kwo. If you find yourself having to eulogize one of your members who was killed in the line of duty, Mullins’s eulogy may give you some ideas. We were particularly impressed with the way Ed spoke directly to Sgt. Tuozzolo’s wife and two children during the service.

Good morning to the men and women of the N.Y.P.D and to the larger police community who are here this morning to honor another fallen brother and officer – Sgt. Paul Tuozzolo – who died fulfilling the highest of God’s missions – saving the life of fellow police officer.

Of all the opportunities I have been afforded to speak in my privileged position as president of the Sergeants union, none have been more important or have made me feel more honored than the one here today. I am truly honored to speak to all of you about Paul.

Ronald Reagan said in his inaugural address in 1981, “Those who say that we’re in a time when there are no heroes – they just don’t know where to look.”

Lisa, Austin and Joseph – you will never have to look for a hero. Lisa, you married a true, eternal hero. You have two beautiful sons whose legacy, now and forever, will be that their father was a true hero. Lisa, your sons and your family will be forever in the hearts, the souls and the prayers of the men and women of the NYPD, who strive daily to rise to the standard of courage, bravery, and selflessness as set by your husband. The exceptionally brave actions of Paul have left a deep hole in your heart and your family.

But today I pledge, on behalf of all of the men and women of the NYPD, that you and your sons will never be alone or wanting for anything that is within our power to give you. Make no mistake about it, Paul is a warrior. His actions can only be described as none less than those of a hero. He responded to a call to help someone. It was a call that every one of the hundreds of police officers in attendance here today respond to every day of the week.

This call was a call from above. It was a call from a higher authority who selected Paul to return home for a greater purpose; a purpose to which none of us will ever be able to understand.

Lisa, Austin, Joseph, and all the members of Paul’s family – you are now a part of a very special and different family. You are part of a family to which the price of admission is more than any one of us chooses to pay. Last Friday, Paul, alongside his colleagues in the 43rd precinct reacted above and beyond what most people would ever think to do and it cost him his life.

As you know, Paul was a delegate with the SBA and in the past few weeks I was able to spend some time with Paul. I had several conversations with him regarding him helping a fellow sergeant; a sergeant who was involved in an incident that every one of us never wants to be in – that being the taking of a human life. We spoke a great deal about the members of the 43, the community and life itself.

I gave a lot of thought about what I wanted to say here today. What could I say to all of you to honor Paul and to help heal the pain in all of our hearts? And perhaps, just perhaps, my words could help to make sense out of what happened last week in the 43.

We in law enforcement remain under attack. In the past three years, five members of the NYPD were not killed in the line of duty, but murdered in the line of duty. Our ideals, our beliefs, our morals and our way of life are all worth defending. They are worth living for, and yes, they too are worth dying for.

Secretary of Education William Bennet gave a speech in 1997 at the United States Naval Academy. He said, “Honor never grows old, and honor rejoices the heart of age. It does so because honor is, finally, about defending those noble and worthy things that deserve defending even if it comes at a high cost. In our time that may mean social disapproval, public scorn, hardship, persecution, or as always, even death itself. So the question remains: What is worth defending? What is worth dying for? What is worth living for?”

I think if we look at Paul’s life and how he died the answer is obvious to all of us – it was Duty, Honor, and Country. Lisa, Austin, Joseph and all the men and women in law enforcement, to my brothers and sisters in the NYPD and especially to all the members of the 43rd precinct, I’ve been asked to share something important with all of you…And I ask you to remember what I am about to tell you.

As you know Sergeant Manny Kwo was one of the officers who responded with Paul last week to that fateful radio call. He too was shot and wounded. Manny asked me to share with all of you his words from a conversation that he and I had when we spoke about that radio call in the 43 last week.

Sergeant Kwo said to me, and I quote, “Paul saved my life Ed – He saved my life. I was approaching that car too, and I didn’t see what Paul saw. I would have continued to approach that car just as Paul did. But Paul’s final words were a warning to me and my partner: he yelled to us, “Gun, Gun, Gun.” I never saw the gun. I would have walked straight into it. Yet because of Paul’s selfless warning I was able to get myself behind cover. Paul saved my life and I want his wife, children and everyone to know what Paul did.”

Paul saved the life of two fellow police officers with his dying words. There is no greater example of heroism known to mankind. Paul died saving the lives of his fellow police officers, his comrades and his friends. Leadership is not about rank nor is it about title. Leadership is about the man. Selfless leadership that places country above all else is a quality that knows no time. It is always in demand, but short in supply.

If Paul were here now I believe he would say to all of us here today, I’m okay- this is not the end of my tour or my final roll call. I’ve been reassigned to a greater purpose.

The rain falls where it wants to and the wind blows where it will and everything on earth goes somewhere. And, Sergeant Paul Tuozzolo, is now leading a legion of legends: Officer Ramos, Liu, Moore and Holder. They are all soldiers murdered in the war on cops.

Paul will remain with all of us. He will be in the shadows standing watch over Lisa, Austin and Joseph. He will remain with us in those dark stairwells and basements and when we are on rooftops or in long desolate alleys. Paul will be that thought that appears and reminds us to not stand in front of that door, to open it slowly, and to walk not run. He will be doing what he always did: leading, helping others, and protecting his brothers and sisters as they patrol the streets of the 43 precinct.

As we go forth here today I encourage all of you to stand shoulder to shoulder, stay together, trust one another and hold the line. No different than Sergeant Paul Tuozzolo. You honor him best with your continued selfless service to your communities and your families. Believe in your heart, believe in your soul that you serve a greater cause. And always, always remember – you are the good guys!

On behalf of all the men and women in the NYPD and the many hundreds, if not thousands of lives of all those you served, I salute you Sergeant Paul Tuozzolo. May God welcome you into His kingdom. May you forever be at peace, until we meet again, my friend. God bless you and your family and all the members of the NYPD.

This is beautiful. RIP Officer. God will promote you. Right to heaven.