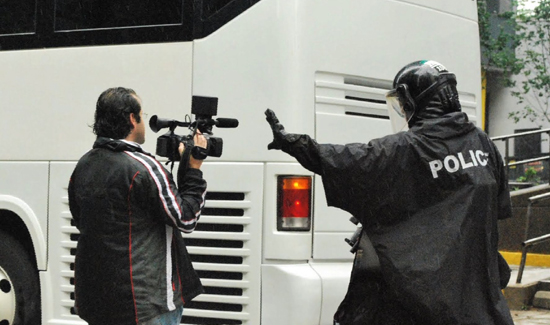 JEFFERSON CITY —  In a free speech ruling that contradicts six other federal circuit courts, the Eighth Circuit Court of Appeals has upheld a district court ruling that says Americans do not have a first amendment right to videotape the police, or any public official, in public.

The court of appeals filed the opinion July 25.

The case stemmed from a lawsuit brought by Matthew Akins of Columbia, who has had numerous run-ins with police as he attempted to videotape them pulling cars over and making arrests. Akins was typically standing on public property such as a street or sidewalk while videotaping the encounters. Akins was videotaping the encounters on behalf of a group called Citizens for Justice, which he founded in 2010.

According to his lawyer, Stephen Wyse of Columbia, Akins was threatened numerous times for his actions, his employer was hassled, and he was ordered to stop videotaping by police on several occasions. He had charges filed against him, many of which were later dropped, according to the Eighth Circuit ruling.

Judge Nanette Laughrey ruled that Akins, and by extension, any citizen or the press, has no right to record the activities of public officials on public property. The Eighth Circuit affirmed this ruling.

Wyse has filed a motion for the Eighth Circuit Court to reconsider its ruling. If it refuses, Wyse said he will petition the U.S. Supreme Court to hear an appeal the ruling this fall.

He said that right now, the seven states of the Eighth Circuit do not have the same first amendment rights that all other citizens enjoy. “The First Amendment is a core American value,” he said. “The right to free speech and a free press are central to our liberty and our ability to hold our government accountable.”