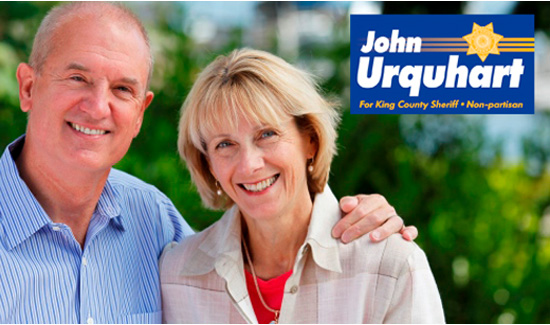 Capt. D.J. Nesel recently testified that a county prosecutor threatened him prior to a court-ordered deposition in which he roundly criticized Urquhart. The allegations came during a Sept. 6 deposition, as a bitterly fought lawsuit involving discrimination claims against Urquhart and his office reached a boiling point.

Urquhart has been ordered to testify as attorneys for the county fight to keep Nesel from divulging details of the sheriff’s comments. King County Superior Court Judge Mariane Spearman is expected to rule later this week whether Nesel can elaborate on his claims. Nesel is not a party to the lawsuit.

Nesel was brought in as head of the internal investigations unit shortly after Urquhart was elected in 2012. Nesel, now in his 25th year with the Sheriff’s Office, said he was told he would be a “change agent” in the unit.

Eighteen months after arriving in the office, though, the former Marine was looking for a way out. He said he’d had enough of Urquhart’s meddling and disrespectful comments.

“There was blustery days and there was great days, all over the map, but it made it very difficult to work down there,” said Nesel, currently chief of police in Maple Valley, which contracts with the Sheriff’s Office for police services.

“Investigators are fact finders, find the facts. They are what they are,” he continued, according to transcripts filed with the court. “It’s truth. It’s transparency. It’s accountability. You find it or you don’t. You don’t need to be intimidated to do that if you’re a professional. If you can’t do that, you don’t belong on the job.”

Responding to claims raised by Nesel, Urquhart denied allegations that he shouted at internal investigations detectives. The sheriff said he regularly and appropriately meets with the unit’s staff.

“I get regular weekly briefings from IIU staff, and otherwise check the status of investigations,” Urquhart said by email Friday. “Not only is this my prerogative, it is my responsibility as sheriff.”