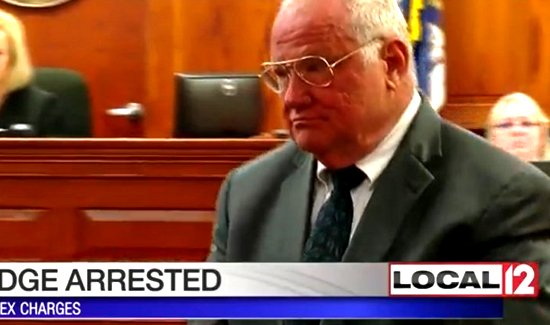 The Associated Press reported Sunday that former Judge Tim Nolan’s bond was set high at $750,000 by Judge Elizabeth Chandler, who looked at the extensive list of charges against Nolan and deemed him “a danger to the community.”

Prosecutors allege that Nolan (pictured above) forced himself on 17 women and girls over the course of seven years. He is currently in the Campbell County Jail awaiting trial.

Nolan’s fall from Republican power player in the state to alleged sexual predator has taken many by surprise. At 70, Nolan has spent decades cultivating relationships, wheeling and dealing among the Republican elite in Louisville and beyond. He is “a fixture at Tea Party rallies and local government meetings,” and ran Trump’s 2016 campaign in the state.

The former judge is charged with human trafficking, rape, prostitution, witness tampering and unlawful transaction with a minor. He faces a total of 20 felonies counts and two misdemeanors. Kentucky Attorney General Andy Beshear’s office said that five of the 17 victims currently known to them are minors.

The sex trafficking charges against Nolan reportedly date to incidents that took place in August, 2016, when he was serving as the Trump campaign’s state chair, the AP said.

Earlier this year, Nolan posted a photo of the Ku Klux Klan on this Facebook wall, resulting in the loss of his position as state chair of the Kentucky Boxing and Wrestling Commission.

If convicted of all charges, Nolan faces more than 100 years in prison.