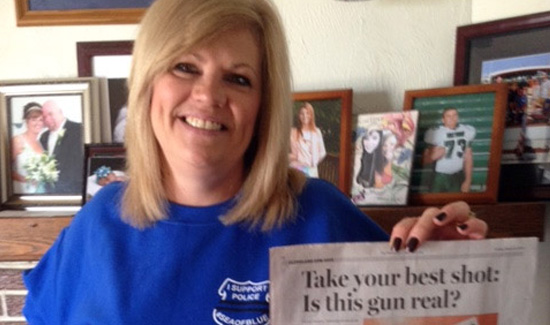 Ed. Note: Check out how the Cleveland PPA raised a serious public safety issue with the local newspaper, got a big story and lots of great PR for the Department and the Association. Best thing about it is that the effort proved the city’s cops really care about the well being and safety of the citizens while educating them about the split second decisions that get made when trying to discern if the gun is real or fake.

The “guns” featured in this news report were all used in violent crimes in Cleveland. Of all the photos, there are only three weapons that are actual firearms. Try to pick them out. Oh yeah, you have half a second to figure it out.

These toy guns are destroying lives. Bad guys use these replica guns to avoid gun specs and additional mandatory sentences while committing violent crimes. We are currently working in Columbus to amend the current gun spec laws to remove the “operational” portion of the language while including “replica and” “toy” guns in the firearms specs.

It should not matter if the gun used in a crime or brandished to police officers can shoot bullets or BB’s. In fact, it does not matter.

The only thing that should matter in charging and sentencing criminals using replica guns is what the victim thought when the gun was pointed at them.