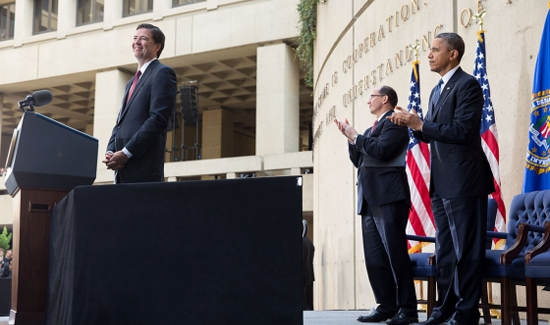 Yesterday, James Comey, director of the FBI, spoke about race and law enforcement at Georgetown University. Comey indicated that he believes some police officers consider race first and foremost when dealing with citizens and suspects.

If anyone thought NYC Mayor Bill de Blasio threw cops under the bus when he discussed having “the talk” with his son, this is more like being thrown in front of a train.

But Comey, formerly a high-powered attorney, is no dummy. He was very careful about not making any direct accusations.

“When you dial 911, whether you are black or white, the cops come, and they come quickly,” Comey told the crowd.

But he also said to the degree that race-based policing takes place, it has more to do with laziness than racial animus.

“Those of us in law enforcement must redouble our efforts to resist bias and prejudice. We must better understand the people we serve and protect. By trying to know, deep in our gut, what it feels like to be a law-abiding, young black man walking down the street and encountering law enforcement. We must understand how that young man may see us. We must resist the lazy shortcomings of cynicism.”

Comey also said that cops don’t get enough pats on the back or respect from the public for the hard and dangerous work that they do.

“The citizens need to see what the police see,” Comey said. “They need to see the risk and danger of law enforcement. And they need to give them the respect and space to do their jobs properly.”

“It’s ridiculous that I can’t tell you how many people are shot by police in this country right now,” the FBI director said in the question-and-answer session.

Comey also said this whole idea that cops need to fight crime where the crime is taking place is a little sketchy.

“It is problematic and untrue to say racial bias stems from black criminality,” he added. “It’s actually that racial bias criminalizes black communities.”

Comey also expressed skepticism about the notion that the use of body cams by law enforcement agencies will have any impact on race relations from a public safety/criminal justice perspective.

i think comey is a wuss and can not handle his job.

Maybe the two black men were named at roll call as being wanted for some crime. The two white guys are dressed like the black guys cause they think it is cool.

may be Mr. Comey should put on a uniform and work a beat in an interracial neighborhood before he states his beliefs. They are baseless opinions that are designed to assist this morally bankrupt administration stir racial hatred.

I bet if President Obama was a cop for a day, he would realize what the men and woman face on a daily basis. It’s all talk and games til you are one of them!!!!