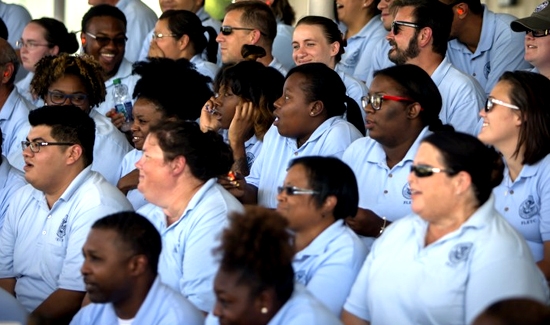 Via The Atlanta Journal Constitution:

Three top officials at the Federal Law Enforcement Training Center in Georgia spent hundreds of thousands of taxpayer dollars to travel the world, appearing on panels or attending receptions and ceremonies.

In the past five years, they made numerous trips to places like Indonesia, Botswana, Bangkok, Budapest and El Salvador, records obtained by The Atlanta Journal-Constitution under the federal Freedom of Information Act, show. The tab for their national and international travel during that time totaled more than $738,000.

“All of our travel conforms to the Federal Travel Regulations and advances FLETC’s mission to train those who protect the homeland,” said retiring FLETC director Connie Patrick. “We make every effort to be as efficient as possible with government travel dollars.”

But a spokesman for Citizens Against Government Waste said the spending seemed excessive and more investigation and oversight are needed.

“There is no doubt the taxpayers need to know if money’s being squandered,” said Curtis Kalin, spokesman for the Washington-based government watchdog group.

At least two congressional oversight committees are investigating the travel as well as asking why the Office of the Inspector General of the Department of Homeland Security, which includes FLETC, is not moving quicker to investigate whistleblower reports of abuse and over-spending.

“Whistleblowers have contacted my office alleging improper travel and wasteful spending by senior staff at FLETC,” said U.S. Sen. Ron Johnson, R-Wis., chairman of the Senate Committee on Homeland Security and Governmental Affairs. “The IG is currently examining the allegations and I look forward to the conclusion of its investigation. In the meantime, my committee will continue its oversight efforts to help ensure taxpayer money is not wasted.”

The House Committee on Oversight and Government Reform is also investigating. The two committees also are looking at claims the Office of the Inspector General for the Department of Homeland Security, which includes FLETC, is slow-walking its response to numerous whistleblower reports.