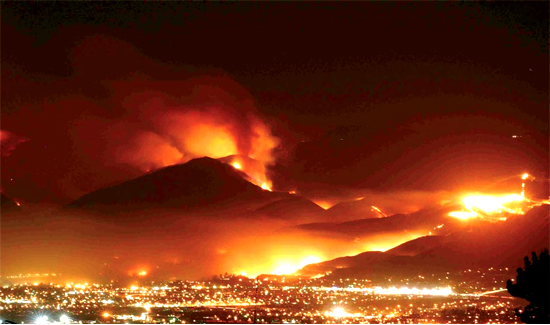 Via The Mercury News:

California’s emergency services director fired off a sharply worded letter to the U.S. Forest Service this week that said the agency had stiffed local governments $18 million for fighting wildfires on federal lands last year and raised the prospect the state may stop protecting national forests during blazes.

The dispute stems from longstanding commitments that coordinate and reimburse firefighters for work on federal lands. Nearly half the land in California is federally owned, and the greatest percentage of that is in National Forests.

Wildfires are fought with a combination of local, state and federal firefighters working under mutual aid agreements that often send them hundreds of miles from home. Massive encampments that sprout up at big wildfires include bean counters who tally the costs of fighting fires and figure out how to reimburse the many agencies helping out.

But Ghilarducci said the federal government was shirking its responsibilities to reimburse local governments by illogically relying on a “sudden interpretation” of a 1955 law that prevents the government from paying volunteer firefighters.

More than a third of the state firefighting force is made up of volunteers who expect to be paid when called into action far from home, Ghilarducci said.

It was “appalling and absurd” that the Forest Service had “blatantly ignored its financial responsibility to the men and women of California who have risked their lives fighting fires to protect federal land,” Ghilarducci said.

Messages left seeking comment from the federal agency were not immediately returned.

Char Miller, a professor of environmental analysis at Pomona College who has written extensively about the Forest Service, said it was shocking the federal government had reneged on a longstanding agreement, particularly as fire season heats up and agencies will want to know if they’re going to be repaid.