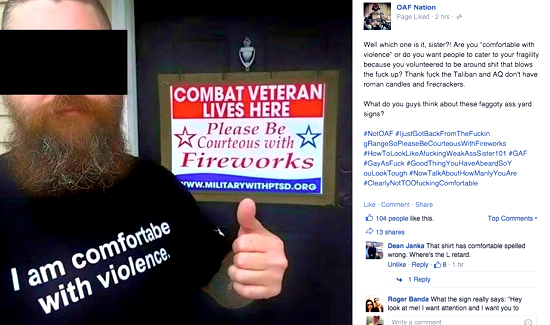 There’s a lot of talk these days about police militarization, but rarely does anyone mention that this is just part of a larger picture—namely, the militarization of society.

For the uninformed, many combat vets have to struggle through the ironic situation they’re placed in on the Fourth of July.

On the one hand, many Americans like to celebrate Independence Day by setting off fireworks.

But if you’re a combat veteran who just returned from a war zone overseas, the explosions can actually trigger panic attacks and other health issues related to post-traumatic stress disorder.

We might think that the guys that veterans that came home to join civilian militias like OAF Nation would be sympathetic to the needs and concerns of the guys that just got back from a war zone.

But we would be wrong.

Some vets who struggle with concussions or the sound of explosions from fireworks have posted signs, which were shipped for free to veterans by the group Military With PTSD, saying “Combat veteran lives here: Please be courteous with your fireworks.”

“Well, which one is it, sister?!” the posts read. “Are you ‘comfortable with violence’ or do you want people to cater to your fragility because you volunteered to be around sh*t that blows the f*ck up? Thank f*ck the Taliban and AQ don’t have Roman candles and firecrackers.”

OAF Nation is an excellent source of intelligence for any law enforcement professional who wants to learn about the increasingly radicalized anti-government extremist movement.