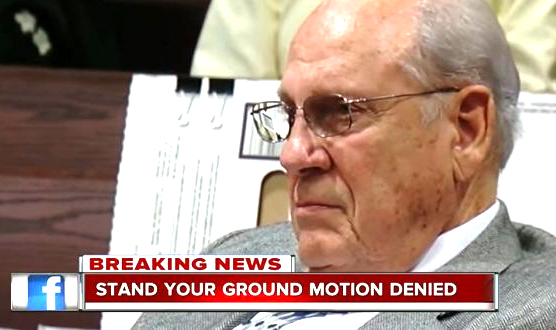 Ed. note: The expansion of protections for individuals in Florida came too late for a retired cop who shot and killed another man in a Florida movie theater. And it’s interesting to look at what the original legislation produced, as far as rates of justifiable homicides and homicide numbers in general. Gun-related homicides are up 31.6 percent since the stand your ground law was enacted in 2005.

Florida, which spearheaded the country’s use of the Stand Your Ground defense, is poised to significantly alter its self-defense laws, making it easier for defendants to use them.

The Florida Legislature is on the verge of passing legislation that would bolster self-defense laws and shift the burden to prosecutors during immunity hearings to show that such laws should not apply.

The Senate on Wednesday passed a revised Stand Your Ground bill by a vote of 23 to 15, paving the way for the House to take up the bill in the coming weeks. Gov. Rick Scott, a strong proponent of gun rights, is widely expected to sign the final measure.

“I think of all the people who will be saved because we did this right and put the burden of proof where it belongs,” State Senator Dennis Baxley, one of the authors of the original 2005 Stand Your Ground bill, said during a passionate floor debate that touched on the importance of self-defense and the reality of race in America. “I’m sorry if that burden seems too heavy. That’s what we do in America. You are innocent until proven guilty.”

Florida, nicknamed the Gunshine State, became a symbol of strong self-defense laws after George Zimmerman shot and killed Trayvon Martin, an unarmed black teenager, in 2012 and was later acquitted when a jury found he was justified in pulling the trigger. (While Mr. Zimmerman argued self-defense, he did not offer a Stand Your Ground case.)

The furor surrounding the shooting brought renewed attention to Florida’s far-reaching self-defense laws and cast a light on several notorious Stand Your Ground claims. In one 2012 case, a Miami man spotted a thief stealing his car radio. After the thief tried to strike him with a bag full of stereos, the man chased him down the street and stabbed him to death. He hid the knife and later sold a few stereos from the bag.

The defendant’s case was dismissed by a judge after a Stand Your Ground hearing.

If the new measure is enacted, the state would again be at the forefront of expanding self-defense laws. Florida would become the first state to apply a tougher standard to the law, putting the onus on prosecutors at the immunity hearing. The burden of proof would be shifted to prosecutors, and defendants would no longer have to present evidence, typically by taking the stand, to prove their claim of self-defense.

Instead, prosecutors would have to prove beyond a reasonable doubt — the highest legal standard — that the use of force was not justified.