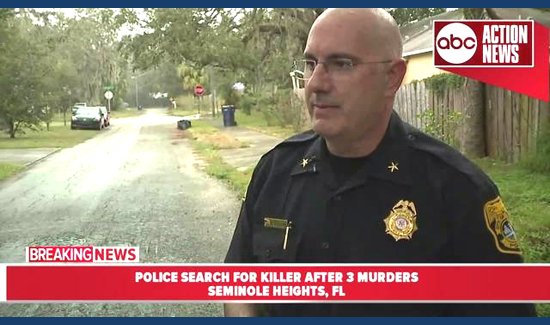 Detectives in Tampa, Florida, are searching for the person responsible for killing three people in the span of 11 days.

“This is my worst nightmare,” he said.

The killings all occurred in the Seminole Heights section of Tampa. The three victims do not have an apparent link to each other, but they were fatally shot within a half mile of each other.

Residents in the area marched together over the weekend, chanting, “Whose streets? Our streets.”

“We are in this for the long haul,” Dugan said. “We are going to find this person.”

Amid fears of more deaths, police are now escorting children to school bus stops in the morning, according to the Tampa Bay Times.

Officers received a list of neighborhood bus stops and pick-up times from the Tampa Police Department on Monday to watch out over students. They will also be watching over students who walk to school.

“We didn’t want anybody walking by themselves to the bus at 6:10 a.m. without somebody nearby,” department spokesman Steve Hegarty told the Times.

The first victim, 22-year-old Benjamin Mitchell, was shot and killed at approximately 9 p.m on October 9 while waiting at a bus stop near his home. He was alone at the time. A police spokesperson said in a press conference that he was “a good person from a good family.”

Two days later, Monica Caridad Hoffa, 32, was shot and killed ten blocks away. Her body was found in a grassy plot of land owned by the city of Tampa. “Her life was taken from her with no motive,” her family wrote in an online obituary.

On October 19, the third victim, Anthony Taino Naiboa was shot just 100 yards away from where Mitchell was killed. Naiboa, 20, had autism and had accidentally taken the wrong bus home from work. At a vigil for Naiboa on Sunday evening, his father, Anthony, shared his anguish. “They killed him just for nothing,” he told the mourners. “Like he’s not a human, like he’s nothing.”

“We think they’re related. Through the proximity and the time frame, they are related,” Dugan told reporters during a Friday press conference. “There is no doubt in our minds about that.”

When a reporter asked Dugan if Tampa had a serial killer on its hands, he raised no objection to classifying the murders in that manner. “We are still sifting through evidence,” he said. “We can call it what we want. If that brings attention to this, that’s fine.”

Dugan is urging the residents of Tampa to take the streets back. “We’re not going to be held hostage by whoever is doing this,” he said. “We need everyone to come out of their homes at night, turn on their porch lights, and just not tolerate this type of terrorism.”