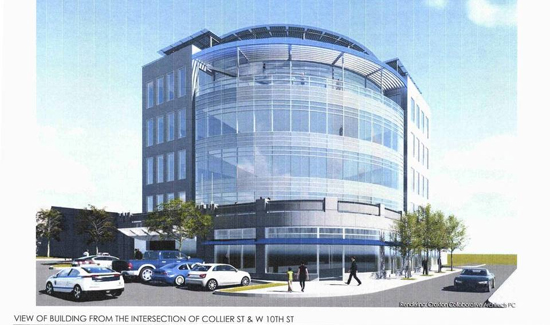 Via the Star Telegram:

Mantford Hawkins roams the stage during a speech at Southern Methodist University, much like the late Apple founder and visionary Steve Jobs.

Wearing an untucked blue shirt and jeans, his bald head shining, Hawkins speaks prophetically during the October 2015 TEDx Talk event about structures that make more energy than they use. In particular, he praises the Fort Worth Police Officers Association for wanting to build such a place near the central business district.

With an artist rendering of a shiny, five-story building as a backdrop, Hawkins says the “strong, courageous leaders of this nonprofit” are “giving their officers a better place as a destination by taking a chance to do something different, bucking the system. Not complying with the status quo.”

Ironically, as Hawkins gave this presentation, the $4.4 million POA headquarters, which was supposed to be near completion, wasn’t much more than an empty lot surrounded by a chain-link fence.

In court documents filed last month in a lawsuit against Hawkins and his associates at 4D Circle in Fort Worth, attorneys representing the POA say that the company not only miscalculated the building’s size by 10,000 square feet, but it then took more than $1 million the association had paid it and used the money on other projects.