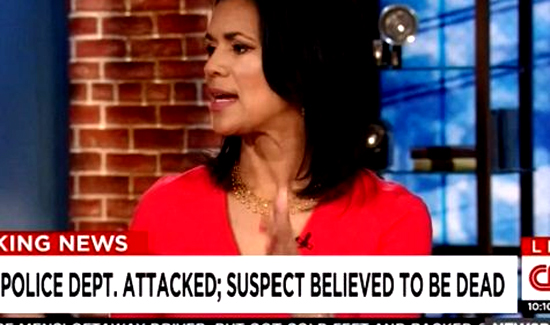 As far as people that are widely despised go, the humanoid teleprompter readers that populate so-called cable news networks are very high on the list—even more so than Congress.

Most of the people you see on television discussing the viral video of the day are not very smart and frequently say really stupid stuff.

If you check this site regularly, you know that she’s the talking head that described a nutjob’s suicide mission at Dallas Police headquarters as “courageous and brave.”

Needless to say, all hell broke loose and CNN immediately apologized. Whitfield, who seems about as bright as the average lightbulb in a dirty microwave, also walked back her comments in a typical media non-apology.

Anyway, the Dallas Police Association doesn’t take these mea culpas seriously—and why should they?

“Yesterday CNN anchor Fredricka Whitfield called James Boulware ‘courageous and brave’ just hours after he attacked our police headquarters with the intent to kill as many police officers as he could,” said Frederick Frazier, Vice President of the Dallas Police Association. “While her comments were appalling and offensive to the men and women in police departments across our country, her flippant non-apology served as further insult. We call on CNN to offer a more appropriate apology for the offensive comments made by Ms. Whitfield.”

Fredricka Whitfield is a pathetic excuse of a reporter/anchorwoman. Calling a potential cop-killer “courageous and brave” is an insult to EVERY POLICE OFFICER ON THIS PLANET! MS WHITFIELD, DO THE RIGHT THING AND QUIT YOUR JOB! YOU ARE TERRIBLE AT IT!