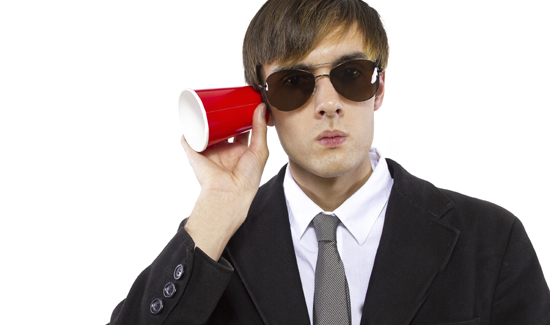 An apparently mentally disturbed individual in Boynton Beach, Florida is lucky to be alive after he approached four local police officers eating dinner and appeared to be reaching for something in his waistband.

According to the Palm Beach Post, the four cops were enjoying a quiet dinner when a local man known to have a history of impersonating federal law enforcement officials approached them.

Since it looked like the suspect was reaching for a weapon one of the officers unholstered his own gun according to police reports.

Instead, the man identified as Joseph Andrew Buck of Boynton Beach, pulled up his shirt to show the very real police officers a very fake badge.

The badge had the words “federal officer,” stamped on it.

One of the officers recognized Buck from other instances where he had ID-ed himself as a federal agent.

When the cops asked who he worked for, Buck allegedly replied: “Secret Service, [expletive]. 007. You can’t arrest me.”

These days lots of people have lots of badges and there’s all kinds of weird deputization programs between the feds and local law enforcement so the officers wisely checked to make sure the man was not another Secret Service agent that had a few too many.

A quick call to the Secret Service confirmed that Buck, 25, does not work for the agency.

While being brought to the lockup, Buck allegedly said: “I spoke to seven agents at the Secret Service and they are going to shoot you because they saw how you treated me when you arrested me … at Ale house.”

Buck is facing charges of impersonating a law enforcement officer and corruption by threatening a public servant. He is being held at the Palm Beach County Jail in lieu of $3,000 bail.

This incident obviously raises important issues about the state of mental health care in this country- particularly in the Sunshine State.