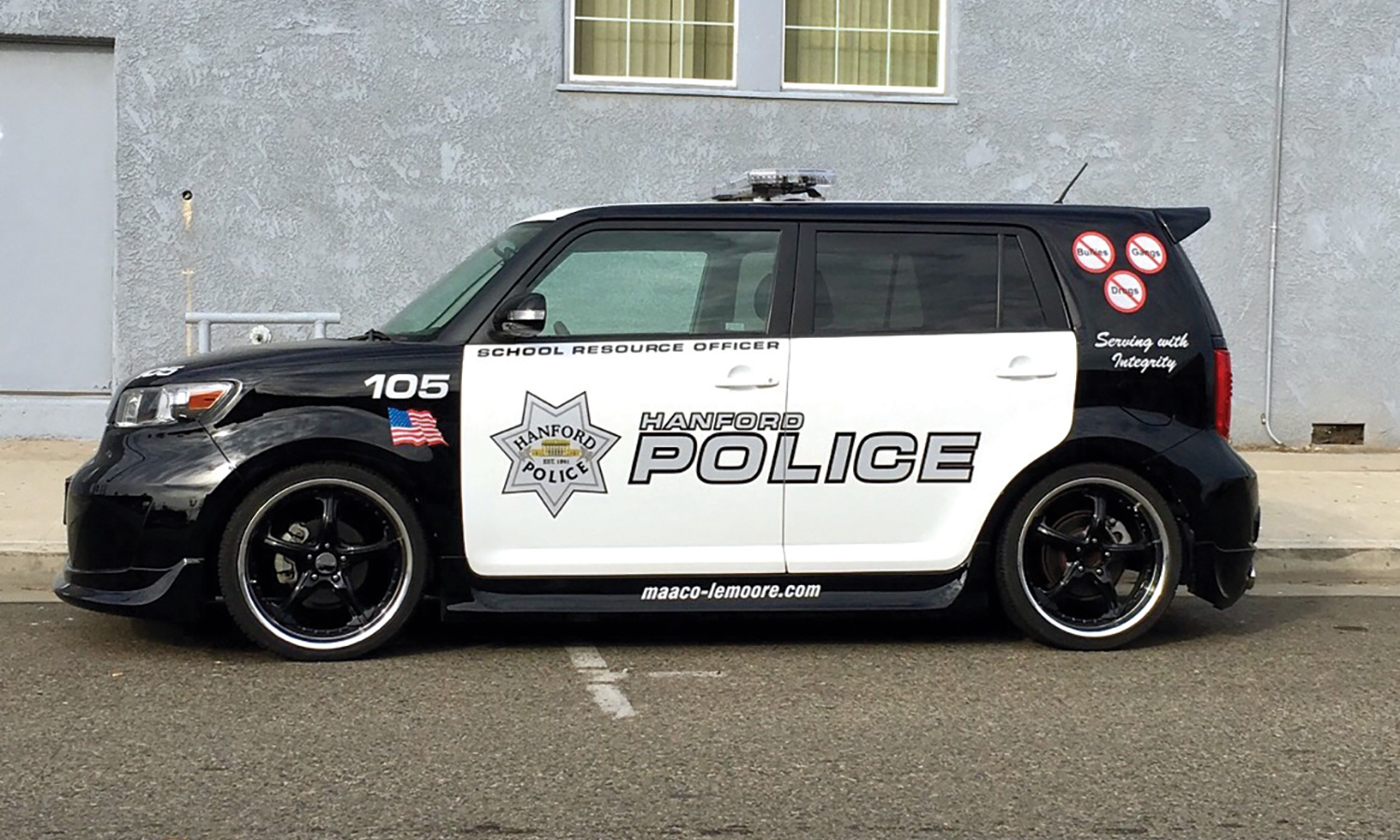 A bit of background: In 2007, Toyota donated a Scion xB to Hanford (California) Police Department’s Gang Resistance Education and Training (G.R.E.A.T.), a street gang prevention program for elementary schools. The car had a red and white exterior with G.R.E.A.T. graphics and was equipped with aftermarket rims, tires, a lowering kit, a killer stereo system, DVD screens on the back of the front-seat headrests and a custom red and black interior — all features to make the vehicle more appealing and cool to the kids. After the G.R.E.A.T. program ended a few years ago, the car just sat around collecting dust.

Fast-forward to 2017. As with most smaller police departments, we work within a tight budget. As our SRO program was expanding, it became more and more difficult to equip all our officers with a police car. I suggested to Chief Parker Sever that perhaps we could turn the old Scion that no one was using into a black-and-white police car for officers assigned to middle and elementary schools. At first, Chief Sever laughed at the idea. I told him that his reaction was exactly what I was hoping for, saying, “Wouldn’t it be fantastic if the citizens of our small community reacted the same way?!” The chief agreed and thought it was a great idea; it definitely fell in line with his vision to enhance community relations by making police officers more approachable.

Knowing that cost would be an issue in my project, I took some time to solicit local businesses for their support. I shared the department’s vision with business owners and even offered to have their business name displayed on the car. With their help, I was able to repaint the car and have it fitted with official police graphics, lights and sirens and a P.A. system, all at a low price. Since the car was going to be used at the middle schools, there was really no need to install a “cage” in the back seat.

When I saw our newest high-tech crime-fighting tool completed, I was absolutely blown away. I thought it was the coolest police car I had ever seen, and I knew the public would love it as well. I knew I was going to get a lot of positive attention from my students, which I did, but I was not prepared for the overwhelmingly positive public reaction. Now, everywhere I drive, people are cheering, smiling, giving me the thumbs up and taking pictures.

Turning a Scion into a cruiser was not enough, though. I had another brilliant (crazy) idea that I presented to my chief: “How about if I could get one of our local doughnut shops to sponsor the car?” He told me to go right ahead. I truly believe he thought I was joking. I contacted the smallest local mom-and-pop doughnut shop in town and asked their permission to have a sticker made for my car that said, “Sponsored by Donut King.” I told them I did not want anything in return, and that I would even pay for the sticker. They were super excited and gave me the go-ahead. The shop did not even have an official logo or graphics, so I had to make one up. The sticker is on the rear window, and it makes me smile every time I look in my rearview mirror, as the driver behind me is usually cracking up at the sticker, reading and realizing what it says. Most students ask me if being a police officer means you have to eat a lot of doughnuts, so I figured I might as well own it!

I would like to share a couple of experiences I’ve had since completing this project. Recently, I happened to be close by to another officer requesting backup on a traffic stop. One of the passengers was a bit unruly and uncooperative, but as soon as I drove up in my unconventional police car, he busted up laughing and said the car was the coolest thing he had ever seen. I told him the department was cutting back and that my car was the future. I also showed him the doughnut sticker. His demeanor completely changed, and the potential risk-filled situation was defused.

I have pulled over several cars for speeding around my schools, and the drivers’ facial expressions have always been absolutely priceless. I remember one violator looked at my car and asked, “What would you have done if I had refused to stop?” (Assuming there was no way I could catch him.) I told him I would simply throw in another hamster under the hood, and after that, no one would stand a chance of getting away. He laughed and signed his citation. Somehow, I doubt he will share with any of his friends that he was pulled over by a Scion police car.

At first, my co-workers laughed at the car and at me driving it. They said that no one would respect me and that they would rather quit than have to drive “that thing!” It is amazing how much their opinions have changed after realizing how much positive feedback I, and more so the entire department, was getting from the community about the car. In times when police are becoming increasingly militarized in appearance and detached from the communities they work for, it is wonderful to see how much a “funny-looking” police car can change public perception and break down barriers between the police and the community we serve. I actually feel like I am getting more respect and trust than ever before!

Besides bringing crooks to justice and helping my students make better choices, I cannot think of a more rewarding and greater feeling than bringing joy and happiness to the community without sacrificing quality of police work.