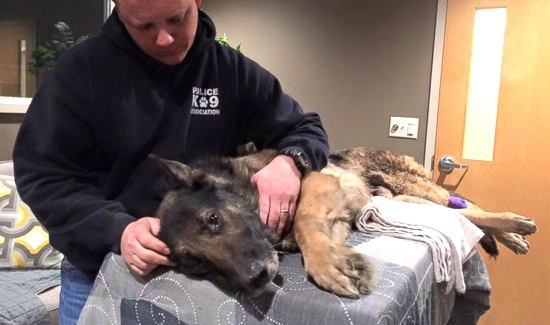 An 11-year-old girl recently donated her allowance money to help get bulletproof vests for all the dogs of Canton Police Department’s K-9 unit in Ohio, according to the head trainer for the unit.

The donation comes after the death of beloved K-9 named Jethro this past January, Office Eric Stanbro said.

Jethro died after suffering multiple gunshot wounds while responding to a burglary at a grocery store, Stanbro told ABC News today. The 3-year-old German shepherd’s death was devastating to Canton P.D. Officer Ryan Davis, who had been partnered with Jethro since he was an 8-week-old puppy, Stanbro said.

“Officer Davis has received 2,000 letters since Jethro’s death, and he was catching up with them over the weekend,” Stanbro said. “He came across this girl’s letter and donation, and it really touched him.”

Why don’t we cut back on the “WELFARE” and use the Millions Saved to be use to Protect all those who are put in Harms way with OUR, My People Tax Dollars! My people are “”VETS OF FOUR WARS and SENIORS OF FIVE WARS! My dad was a cop and in “””those days””” they were more respected

It should be a felony everywhere if you hard a Dept Dog!! Also We need to stop giving money away, stop sending and spending money in countries where we don’t belong and are not wanted. We need to take that money and use it to support our own. We need to support law enforcement and our Military because the way things are going we are going to need both right here in the Good Old USA really soon. Lets not forget things like Social Security… stop pissing our money away and support that seniors can no longer afford food much less over priced drugs…
Just saying…. Kevin D