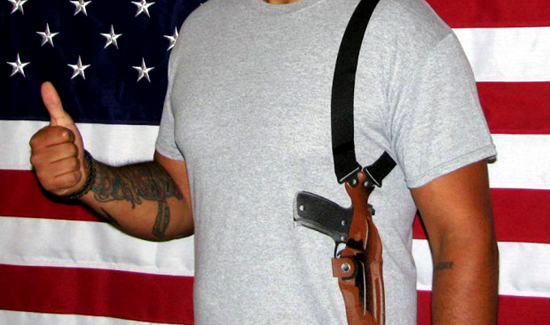 According to multiple media reports, a Colorado entrepreneur has created a t-shirt that’s a big hit.

The shirt is pretty simple—it’s a white t-shirt with a very realistic gun in a shoulder holster, making it appear as if the wearer is carrying a firearm.

CBS Channel 4 in Denver reports the t-shirt is made by a Colorado man named Paul Liebe.

Liebe says the design is intended to start discussions about the Second Amendment and allow the wearer to express their views on gun rights.

“Freedom of speech, it’s your right, and it just has a little kick on the side,” Liebe told CBS4.

The shirt comes with a warning: “Don’t put your hand on the shirt on the gun,” Liebe tells customers. Law enforcement officers may overreact to your shirt. It looks like a real gun, at a short distance.”

If confronted, a wearer should, “Be responsible, obey all orders. … halt, stop, freeze, immediately,” Liebe says.

Commenters on the station’s website pointed out that one could carry a real gun instead.

“You can do that you know,” said Roger Lawhorn.

“Anyone that wears this as a self defense item is a moron,” wrote JP2012.

“Strikes me as something akin to wearing an antler hat in the woods during deer season,” said flyovermark.

“It’s a shirt, it’s no big deal. Very few people will be fooled by it,” wrote John C.

And richard mcenroe wrote: “This idiot WILL get someone equally stupid killed. The only upside is, hopefully they will not have reproduced before Darwin’s Law kicks in.”

“Just carry a real gun. Open carry is legal in most of Colorado – excepting the People’s Republic of Denver/Boulder,” said Nathan Bedford Forrest.

At any rate, the shirt’s a hit.