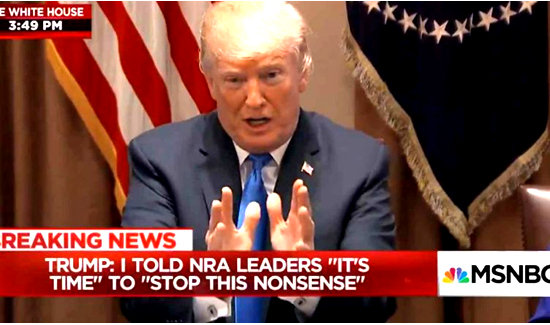 “He’s coming for the guns!”

At least that’s been the startled reaction of the NRA and gun rights activists after President Trump suggested that the government should be able to seize firearms from law abiding Americans without due process.

“I like taking the guns early, like in this crazy man’s case that just took place in Florida … to go to court would have taken a long time,” Trump said at a meeting with lawmakers on school safety and gun violence.

But no one should be too worked up because by know most people realize that Trump is a shoot from the hip guy who acts on impulse and then tries to walk back whatever policy proposal people are reacting negatively to politically speaking.

At any rate, the NRA and gun owners are not pleased.

“While today’s meeting made for great TV, the gun-control proposals discussed would make for bad policy that would not keep our children safe,” NRA spokeswoman Jennifer Baker told The Hill.

“Doing everything we can as a nation to address the problem of dangerous people committing heinous acts is not inconsistent with the Second Amendment – the systemic failures of government to keep us safe reinforces the need for the Second Amendment,” she said. “We will continue to support legislative efforts to make our schools and communities safe and oppose gun control schemes that cannot keep us safe and only punish law-abiding Americans.” Many are even suggesting that Trump was a wolf in sheep’s clothing- a candidate that ran as a conservative and Republican that was really a secret Democrat.

But Kellyanne “Skeletor” Conway says the meeting wasn’t even about gun control.

“This meeting was not about gun control. This meeting — let’s not forget — is about school safety.”

Weird- it looked like there was as lot discussion about gun control on the videos.