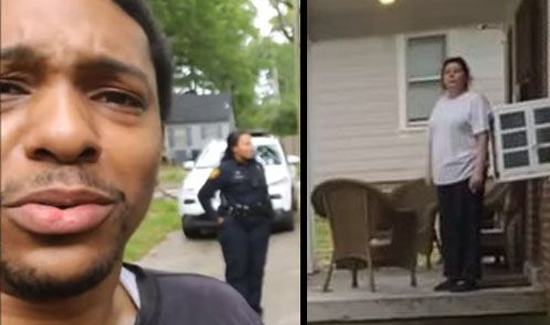 (Editor’s note: In a viral video recently uploaded to Youtube, a young man simply trying to conduct his business is harassed by a woman who believes he is up to know good based on his appearance. These calls are a huge source of aggravation for police officers who would rather be chasing bad guys as opposed to responding to the ore ridiculous variety of “I saw something so I’m saying something,”calls.

A Memphis real estate investor recorded an encounter with a disgruntled neighbor who tried to have him arrested while working on one of his houses.

Michael Hayes, who uploaded the incident on YouTube on May 5, said in the video he was there that day to take photos of a house he has a contract on.

Hayes said the woman then insulted him and the police officers, saying they weren’t doing their jobs.

At one point in the video, Hayes pointed out to the officers that he was recording the encounter on his phone.

“You keep the camera rolling,” said one of the officers. “If you have any problems with her, what I want you to do is call me back over here.”

“I’ll call you as soon as I have a problem!” Hayes responded.

The officer told the woman to leave Hayes alone and that he had every right to be there. The neighbor then claimed she was friends with the sheriff.

“I don’t care if you’re friends with the president,” the officer said. “You’re going to let him do what he’s going to do. If you try to do anything to stop him, I’m going to take you to jail.”

The woman then told Hayes to hurry up with the job and get out of her neighborhood.

The officers then told her that since Hayes was allowed to be there, he could take his time.

Hayes told the officers that he was uncomfortable staying at the property by himself. The officers agreed to stay while he finished his work.