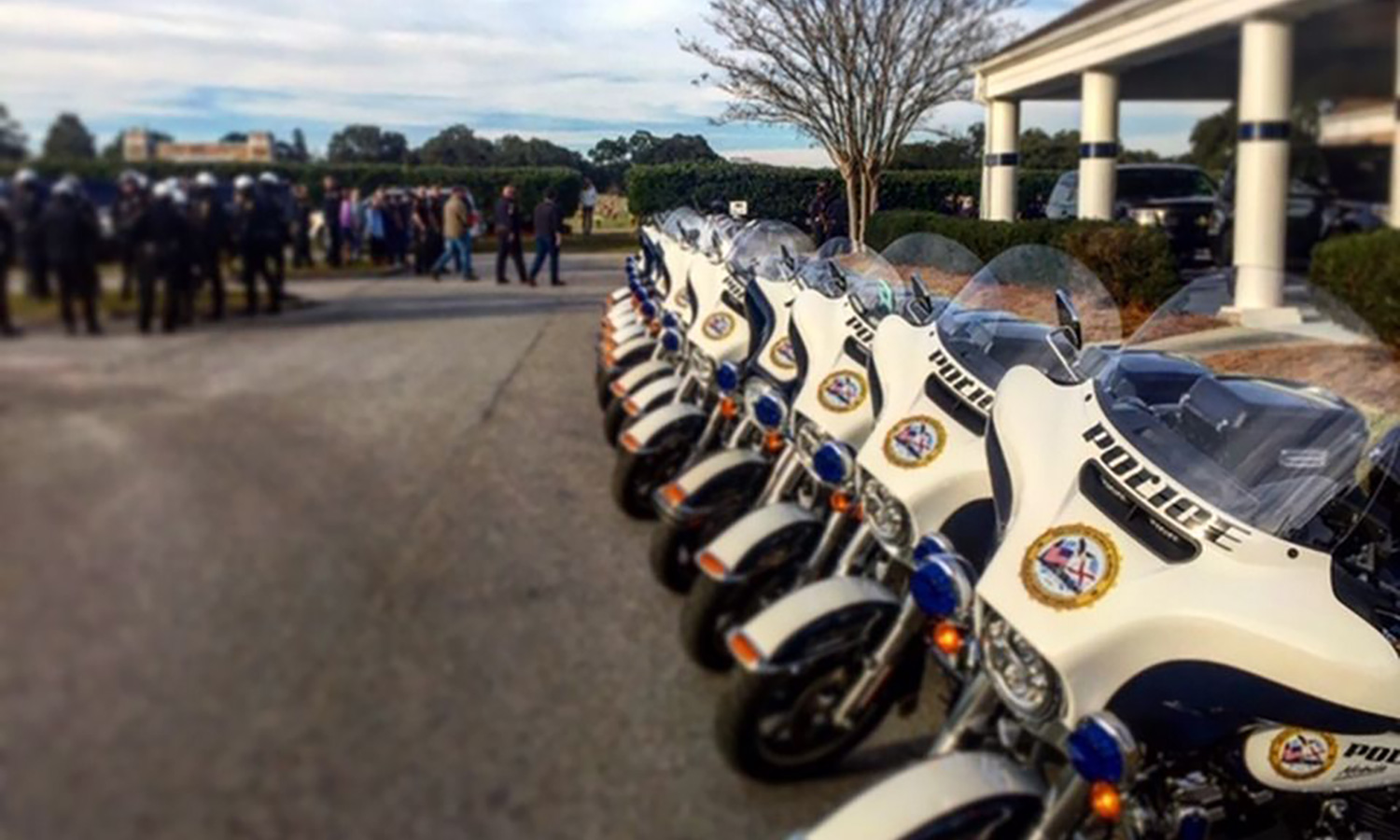 Hundreds and possibly thousands of people gathered on the streets of West Mobile Monday afternoon to see the procession that carried the body of slain Mobile Police Department Officer Sean Tuder across town.

U.S. and Thin Blue Line flags could be seen fluttering in the wind as Tuder’s body was taken from the Department of Forensic Sciences near the U.S.A Medical Center to Mobile Memorial Gardens Funeral Home at Tillman’s Corner, the same place officer Justin Billa was laid to rest almost one year ago after he was also shot and killed in the line of duty.

Approximately 250 people stood patiently on the sidewalk near the funeral home alongside first responders from towns and cities from various parts of lower Alabama.

Some of those that came to pay their respects wiped tears as the first two Mobile Police Department motorcycles turned into the funeral home.

“We are just so sad this has happened again,” said Jules Barnett, a Mobile local who stood across from the funeral home with her two children. “They are so brave. I just can’t believe it.”

David Williams, a man who came in from Biloxi, MS, for the procession, said that he was honored to have been able to make the trip and pay his respects. “It’s never a good thing to see this happen,” said Williams. “But it’s good that so many people come out to show how much they respect our first responders and military personnel.”

Governor Kay Ivey ordered that flags across the state be flown at half-mast.

Two minutes after the first vehicles began arriving at the funeral home, a Mobile Fire-Rescue ambulance flanked by four police department motorcycles also made the final turn into the funeral home on Three Notch Road. It’s not yet clear if Tuder will be buried in the same plot at Officer Billa, who was shot and killed Feb. 20 in what turned out to be a double-murder suicide.

The man who was ultimately accused of killing Billa had an hour before killed his ex-wife and then later took his own life.

Marco Perez, the teenager suspected of killing Tuder Sunday afternoon, was told Monday morning that he was being held without bond. While bond is ordinarily granted in most criminal cases, Perez was denied bond because of a federal warrant out against him.

After the final vehicle turned into the funeral home, Tuder’s police colleagues stood side-by-side with members of the Alabama National Guard. Tuder was a member of the 173rd Infantry.

In a letter written by Tuder’s family Monday they asked for privacy but thanked people for their thoughts, prayers, and support.

“Sean loved his family and this country and knew this was a chance,” they said in the letter. “He is our hero and a patriot.”