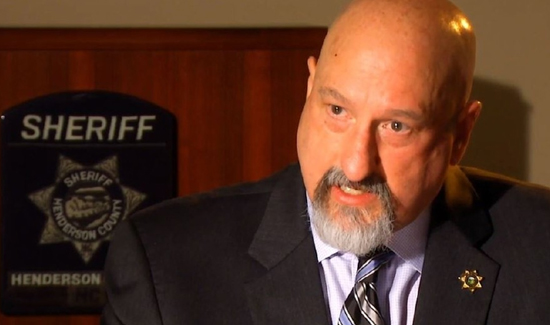 The Henderson County (NC) Sheriff’s office has been publishing its newsletter, The Guardian, for about two years. Sheriff Charles McDonald says it’s a way to, “Keep the community up to speed and educated about who we are and what we’re doing in the community.”

On Feb. 6, the sheriff’s office released the February edition (found here) without much fanfare, initially.

The first two paragraphs from the newsletter are as follows:

Rule of Law? We don’t need no stinking law!” This seems to be the message of those “protestors” destroying businesses and property while restricting free speech and interfering with the rights of fellow citizens to peacefully drive or walk on public streets or byways. What entitles them to scream vulgarities and to physically attack and ridicule those who dare question their myth-based, passion-inflamed, anarchist ideology? Well, they don’t like what they don’t like, regardless of how or why it happened.

They are like a child playing a board game. Gleeful at the prospect of winning but impetuously overturning the table and throwing a tantrum when faced with the prospect of losing. No nation or community can enjoy a peaceful existence when the Rule of Law is cast aside for no other reason than an election didn’t yield the results that some people hoped for. A nation that cannot subjugate itself to the laws established for the security and governance of its people, especially when those laws were established by its people, will not be able to provide peace and security for its people. Such a nation would be in great danger of forfeiting its own liberty to the angry passions of misguided rebellion founded in ignorance and oblivious to the righteous constraints afforded us all by the Rule of Law.

Some residents who read the letter supported the sheriff’s message, but others responded with questions and criticisms, believing the sheriff was condemning local and national protests, such the Women’s March.

But the sheriff says this was not his intent.

“I support anybody’s right to protest peaceably and within the context of the laws and the constitution, but that whole article was written, as it says in the first line, about people that were destroying businesses and vandalizing property,” McDonald says.

The sheriff says this letter was written in response to protests that turned violent in Berkeley, California, a few days prior. But, Berkeley was never mentioned in the letter.

C.C. Blackburn, an activist and resident of Hendersonville, believes the letter wasn’t specific enough to draw that conclusion.

“I don’t think he left anything to misinterpretation,” Blackburn says. “It was very clear what his feelings are, what his stand is, and he feels that people shouldn’t be questioning what’s going on right now.”

The sheriff did note that, perhaps, his language could have been more specific.

Other comments questioned the sheriff’s decision to post his opinions in such a public manner.

“When I first saw and read it, I thought, ‘what is this off his blog or is this someplace, is this private?’ And then I realized it was in a public newsletter. And a public newsletter coming from the sheriff’s office. And I was, baffled,” Blackburn says.

In response, McDonald says, “Yeah, I don’t think it’s my job to impose anything, but that is my newsletter.”