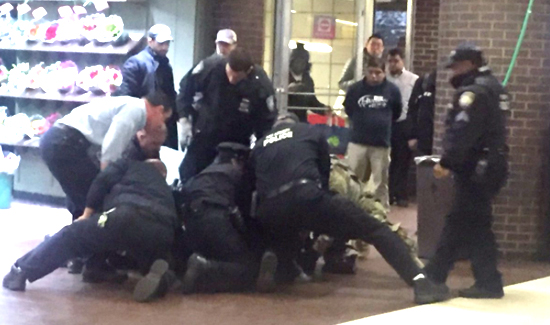 A group of heroic Port Authority of new York and New Jersey police officers became world-famous recently after they bravely responded to the attempted terrorist attack in New York City.

The officers were celebrated for their bravery after making sure the suspect didn’t have any other explosive devices and keeping commuters safe.

You’d think these guys would still be basking in all the glory and enjoying everyone’s offer to buy them coffee, lunch and drinks.

But just five days after subduing a Midtown terrorist, these heroes were handing out Christmas gifts to needy kids across the Hudson River in Newark. Talk about class- the guys not only played down there own heroic acts, they also pointed out that there are tons of cops who make a difference everyday that no one ever hears about.

“There’s a lot of heroes out there every day doing their 9-to-5,” said Sean Gallagher-one of the officers. “I think we feel blessed that nobody died on Monday.”

I think it’s wonderful they got the POS terrorist. “Blesses are the peacemakers.”
Thank you to all police officers for all they do! ????