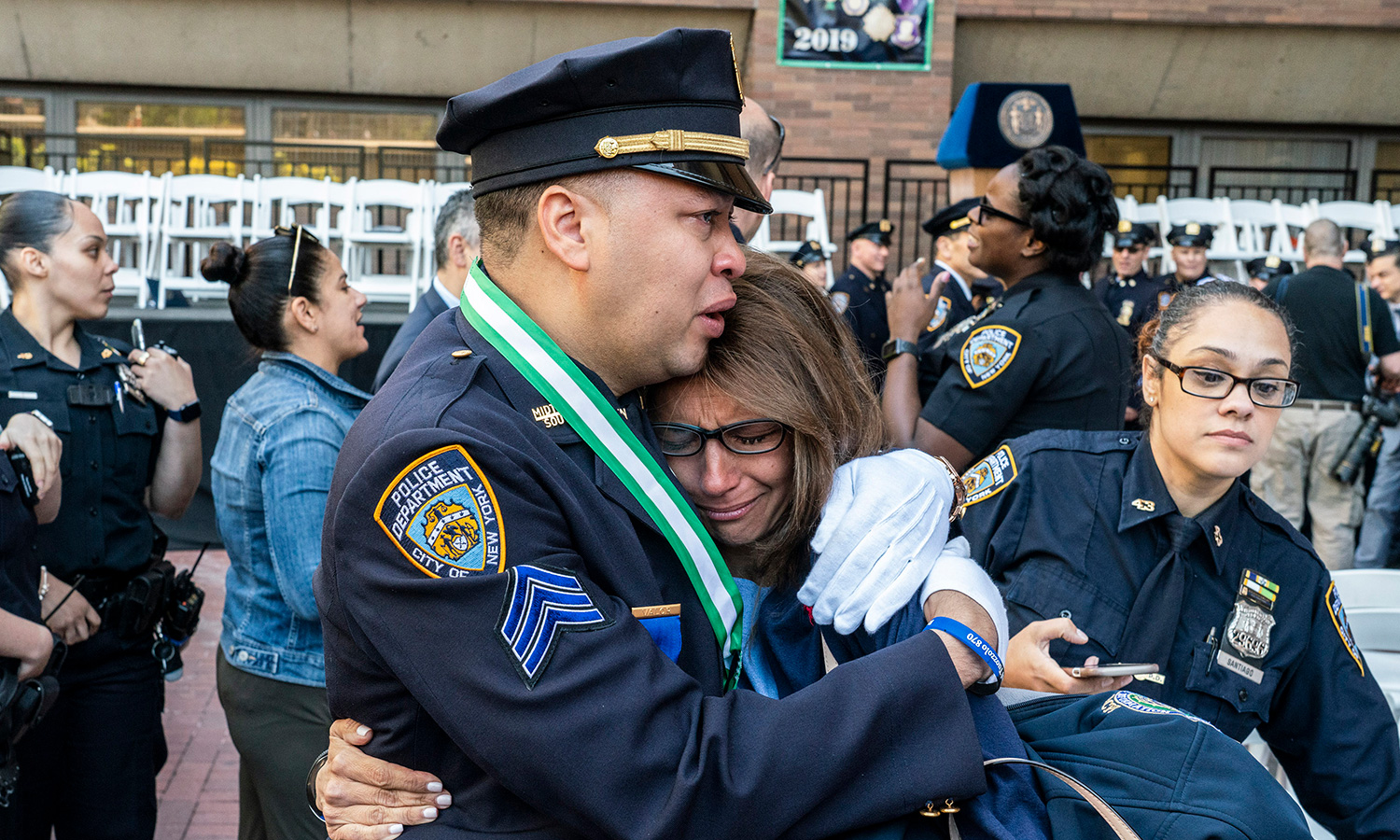 The wife of an NYPD sergeant who was gunned down by ex-con in the Bronx became emotional Tuesday when the three cops who put their lives on the line to defend her husband until his last moments were awarded the department’s top honor.

“[I want to tell them] just how much I love and appreciate them,” Lisa Tuozzolo, wife of slain Sgt. Paul Tuozzolo, said after the NYPD Medal Day ceremony, her eyes beginning to well up.

“They are uncles to my children. They are the support system that I need and I’m proud to know them.”

In a morning ceremony at One Police Plaza, Lt. Manny Kwo, Sgt. Arvid Flores and Officer Elwin Martinez received the Medal of Honor — the department’s highest accolade — for their role in taking down the gunman who fatally shot Tuozzolo in 2016.

Kwo, who was joined by his wife Sherry, told reporters after the ceremony that he owes everything to Tuozzolo — even his nearly 15-month-old daughter, Willow, who he held in his arms.

“I’m going to tell [Willow] everything about the man that made it possible for her to be here,” he said.

“I’m going to tell her about how kind he was, how gentle he was and about how much he helped me become the supervisor that I am today. I wouldn’t be the person that I am without who he was.”

Eighty-five other NYPD cops — some living and others deceased — were also honored at the Tuesday ceremony.

“They have to be the best, because lives depend on how they do their jobs,” Police Commissioner James O’Neill said of the honorees.

“Their lives, their fellow cops’ lives and the lives of those they’ve sworn to protect.”

Recipients of the Police Combat Cross, the department’s second-highest honor, included Sgt. Keith Bryan and Detective Joseph Ayala — who fatally shot the recidivist gunman who killed Police Officer Miosotis Familia in a mobile command vehicle in July 2017.
And Detectives Timothy Brady and Jason Hallik, both of the Bomb Squad, received the Medal for Valor — the department’s third-highest award — for their role in dismantling the second explosive device found only blocks away from the scene of the September 2016 Chelsea explosion.

Police Officer Ryan Nash, of the Technical Assistance and Response Unit, received the same award for his role in subduing the terrorist allegedly behind the October 2017 truck attack on the West Side Highway.

Among the posthumous honorees was retired Chief of Detectives William Allee, who died of leukemia as a result of the time he spent at Ground Zero following the Sept. 11 terrorist attacks.

“Every officer who is being honored has written a heroic chapter into the history of the NYPD,” Mayor Bill de Blasio said at the event.