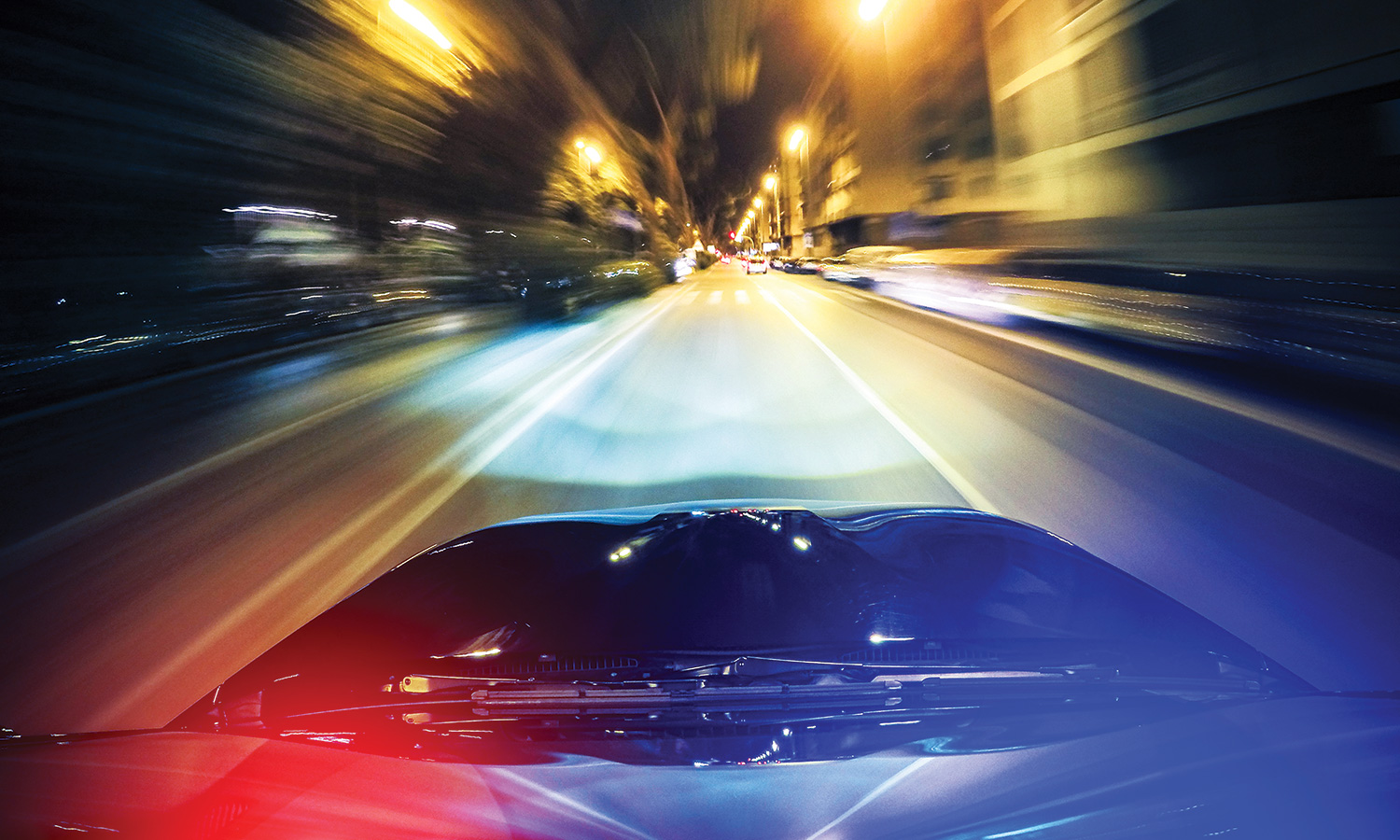 In the early 2000s, I was still working as a patrol officer for a municipal agency near a large metropolitan area. It was a quiet and very early Sunday morning in my normally peaceful suburban community. My patrol unit was running low on gas and I was headed to the fuel pump to fill up when the call went out involving a commercial burglary at a large shopping mall less than a quarter-mile from my location. As I approached the road leading to the mall, less than 30 seconds after the call was dispatched, things rapidly went downhill and got crazy.

Dispatchers advised that a large group of males was exiting a service entrance of the mall after having broken into a high-end leather accessory store, carrying armloads of merchandise. They ran toward and got inside two vehicles, described as a white Ford Crown Victoria and a white Dodge Intrepid. Another unit that had also been close by and arrived before me advised that the Ford had attempted to run them down when they exited their police car and tried to approach. The officer added that that vehicle was headed directly to my location.

I stopped my car in the middle of the road and waited. Approximately 15 seconds later, I saw headlights that I recognized as the front end of a Crown Victoria, headed toward me at a high rate of speed. I activated my emergency lights and siren and held my ground in the middle of the intersection.

The suspect vehicle blew past me and proceeded to flee. I initiated a pursuit, which involved chasing this car down the wrong side of two city streets as it made its way toward the highway in an effort to escape. Another marked patrol unit blocked about 80% of the roadway, yet the suspects were able to drive around the police car and enter the highway headed north. The margin by which the fleeing car passed the patrol unit was so miniscule, I am certain that a catastrophic collision would have ensued had the police car’s bumper had another coat of chrome. As I followed the car onto the highway, our speed reached well over 100 miles per hour.

The suspect vehicle drove to the next exit and got off on the ramp, striking a large piece of concrete construction material on the shoulder of the road but not stopping or really slowing down. It proceeded to re-enter the highway, traveling southbound and again accelerating to over 100 miles per hour. As this was taking place, I was reporting the action via radio while listening to our dispatcher, who was now providing information concerning the high-speed pursuit of the Dodge, which also fled the scene of the crime. That vehicle ran southbound down the highway and our dispatcher was able to raise our state patrol, which sent a unit to assist.

My suspect vehicle traveled south for over 15 miles as I pursued. I was now concerned that the car was going to get away from me due to my low fuel situation and was requesting backup on the air. The closest help was more than two miles behind me. As I continued the chase, we entered a perimeter highway and traveled nearly 10 miles on this road until exiting onto another southbound highway. Additional information was provided to me during this time, advising me to use caution as the vehicle I was chasing matched the description of one used shortly before this incident in an armed robbery in a major suburban area near my own jurisdiction.

As the suspect car proceeded about three miles down this final stretch of highway, I observed smoke coming from under its hood. Shortly thereafter, the car rapidly began to slow and moved to the emergency lane just short of an exit ramp, where it rolled to a stop. At this point, all four doors flew open and four suspects exited the car, jumped the guardrail and ran into the woods. I observed them to be empty-handed of any of the stolen items but was still concerned about the reported armed robbery. I counted to 10 before approaching the vehicle with my service weapon drawn. There were no people inside, but I did recover around $30,000 worth of merchandise that the suspects abandoned. I secured the area, called for local police to be on the lookout for my suspects and requested a wrecker for the car. As I waited, I was able to hear the radio traffic associated with the other involved car.

To everyone’s amazement, the state trooper had responded to the call from miles away, traveled northbound past both my pursuit and the second one in the opposite direction, exited the highway, turned around, and still managed to catch up to and PIT the fleeing Dodge. This resulted in the arrest of four suspects and the recovery of another $30,000 in stolen merchandise. The suspects from that car remained uncooperative.

As I awaited the arrival of my tow truck, I pondered the potential investigation into this crime. I already knew that even if the mall and the store had any video footage, it would not be of very good quality and was not likely to be of much value in identifying any suspects. None of the responding officers had ever gotten a good look at the suspects in the car I chased, and neither did I as they fled the car when it stopped. I did have the registration information for the car, which to my surprise returned to that car and described a female owner from the major city we were now in.

I was still mulling this over when a marked traffic enforcement unit from the county pulled up behind me, and out got an officer whom I casually knew. He walked right past me to the back of the suspect vehicle, jotted something down and returned to his car. I went to his car and asked him what he was doing at my scene and what he was writing. Laughing, he said, “Yep! That’s it.” When I asked him what he meant, he told me that about 20 minutes before my burglary call came in, he made a traffic stop on this car as it was headed north and toward my incident location. He had issued the driver a speeding ticket.

Needless to say, this made the investigation of this case much easier! Contact was made with the owner of the car, who untruthfully advised us that the car had been stolen but not reported. Once she was interviewed, she then “recalled” her boyfriend and his associates “borrowing” the car earlier in the evening and proceeded to identify them all. During questioning, all four admitted their participation. Case closed!

I would like to point out several things of value from this incident. Much of this is old hat to the experienced officer, but I believe it still bears repeating.

First, be prepared for anything. Even in the early hours of a Sunday morning, anything can happen and likely will when you least expect it.

Secondly, and related to the first point, keep your patrol unit fueled appropriately. I got lucky that my pursuit ended when it did, but I had to use my own cash at a nearby gas station in order to get back to
my station.

Next, do not attempt to be a hero when the incident in which you are involved has factors such as the threat of violence to yourself and the crime is only a theft of merchandise. Do we want to catch thieves? Of course! Should we risk our lives for a carload of purses? I do not believe so.

Finally, when you catch a bit of luck on the job, by all means, take advantage of it.

Jeff Kahn is a police detective retired from a 28-year career in law enforcement. After graduating from college with a criminal justice degree, he worked for 12 years as an investigator for a state probation agency and then 16 years as an officer for a municipal police department in a bedroom community of a major metropolitan city. His career focused on investigation of all types of crimes with an emphasis on fraud, but included stints in narcotics, homicide and street crime. He also was a member and later commander of a multi-agency hostage negotiation team.