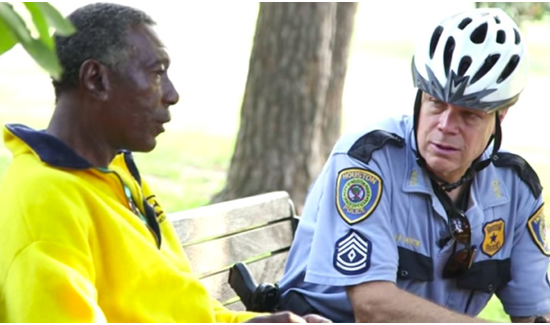 If you’re a regular reader of the print edition of American Police Beat, you’ve probably come across a few articles about a cop in Houston named Steve Wick.

Sgt. Wick is the kind of cop that can actually restore one’s faith in humanity. He does homeless outreach, but that doesn’t quite cover it.

Part of what Sgt. Wick does is trying to keep complaints coming into the police department about homeless people by getting them hooked up with housing and social services.

But another part of what Steve does is show everyone what it means to be a decent human being—and a big part of that involves watching out for one another, especially the less fortunate.

In a world where there’s so much hate, bragging, and violence, it’s really chicken soup for the soul to watch this incredible police professional change lives and hearts on the job.

It’s not the kind of police work that’s for everyone.

Like the sergeant said, you have to be called to it.