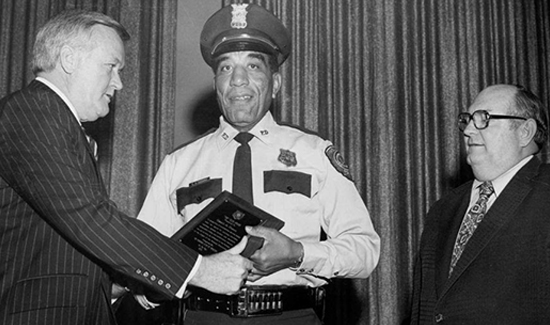 Thomas died Monday morning at the age of 95 of natural causes.

On July 27 the department’s 26-story Travis Street building was renamed for Thomas, who served 63 years with HPD. He was known as “Mr. Thomas” around the department by friends and fellow officers.

“Mr. Thomas persevered and served with dedication and hard work. At the time of his retirement, he was the most revered and respected officer within the Houston Police Department,” the department said in a statement Monday.

Thomas graduated from Cadet Class No. 1 in 1948. As one of HPD’s first black officers, he worked a foot patrol in a mostly-black neighborhood because he wasn’t allowed to drive a squad car. Subjects had to be taken to jail on foot or using mass transit, and he had to ask for a supervisor’s permission before arresting a white person.

“I am saddened to hear of Mr. Thomas’ passing,” HPD Chief Charles A. McClelland, Jr. was quoted in the department’s statement. “He was a man who I respected immensely and was honored to know and call my friend. The Houston Police Department and the City of Houston was a better place of having had him as an officer.”

In recognition of his 63 years of service, HPD renamed its headquarters for Thomas on July 27; Thomas name was scheduled to be added in gold letters to the front of the building at 12oo Travis in the coming weeks. At a naming ceremony held in his honor, Houston Mayor Annise Parker recognized the retired officer’s “dignity and grace,” and applauded his “community-oriented policing.”