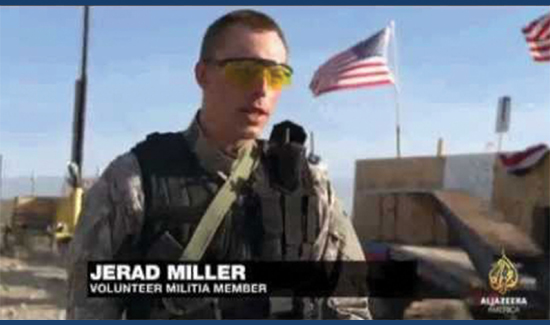 The bloody weekend in Charlottesville that began with several hundred chanting white supremacists on a torch-lit march will long be remembered for the searing image of a growling muscle car plowing through a defenseless crowd of counter-protesters.

But there was another moment from the weekend that revealed a potentially more consequential truth about the long-term impact of the “Unite the Right” rally.

Not long after James Fields—a white nationalist who had posted an image of Donald Trump as king on his Facebook account—allegedly killed Heather Heyer with his Dodge Challenger, protesters linked arms along one of Charlottesville’s sidewalks. Three feet away, a line of men stood in camo pants and tactical vests, all carrying long rifles. The men were not police, whose job was to prevent violent confrontations but who largely stood to the side during the melee. They were militia-men, who had gathered in Charlottesville to act, as one expert on anti-government extremism said, as a “third force”—as a peace-keeping buffer, in theory, between far-right agitators and their opponents.

Despite the militias’ public statements of neutrality, evidence has mounted over the past six months that the militias have gravitated decisively toward one side in the street battles that have played out recently in cities across the country. Indeed, during these first months of Trump’s presidency, these loose-knit organizations making up America’s militia movement are losing their anti-government ideological purity as they grow increasingly close with a segment of the right-wing from which many in the recent past had generally kept their distance. Their presence as a private security force for an increasingly public coalition of white nationalist factions—Ku Klux Klan followers, neo-Nazis, and alt-right supporters—has transformed a movement that has already demonstrated a willingness to threaten violence.

While there is evidence that some of the militia members stepped into the breach to try to keep the peace on Saturday, many critics contend their presence exacerbated tensions and prevented the restoration of order. When asked why police didn’t do more to stop the bloodshed, Virginia Gov. Terry McAuliffe pointed to the riflemen strolling the streets. “It’s easy to criticize, but I can tell you this: 80 percent of the people here had semiautomatic weapons,” the governor said. “You saw the militia walking down the street. You would have thought they were an army … [The militia members] had better equipment than our State Police had.”