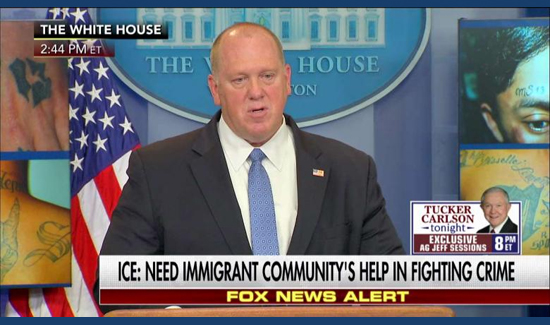 President Trump’s immigration chief ripped into Gov. Jerry Brown on Friday for signing legislation that creates a statewide sanctuary policy, saying the federal government will be forced to “conduct at-large arrests in local neighborhoods and at work sites” of undocumented immigrants.

He said Brown’s decision to sign SB54 on Thursday makes “California a sanctuary state for illegal aliens—including those who have committed crimes.”

“The Trump administration is once again making heavy-handed threats against California because we won’t help them tear apart families and our economy in the process,” de León said.

SB54 bars law enforcement officers in the state from arresting individuals based on civil immigration warrants, asking about a person’s immigration status, keeping an undocumented inmate in jail on an immigration hold, or participating in any joint task force with federal officials for the purpose of enforcing immigration laws.

The bill does not prohibit federal immigration officials or the Department of Homeland Security from enforcing federal immigration laws in California. Instead, the law says California will not use its own law enforcement resources to help the federal government in those actions. De León introduced the bill in direct response to Trump’s crackdown on undocumented immigrants, which has left many in fear.

“These are uncertain times for undocumented Californians and their families, and this bill strikes a balance that will protect public safety, while bringing a measure of comfort to those families who are now living in fear every day,” Brown wrote after signing the bill Thursday.