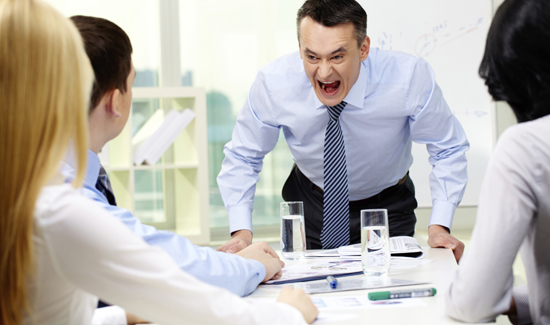 Not only are bad bosses difficult to deal with, but their behavior also rubs off on those around them.

That was the message a University of Manchester research team presented at the British Psychological Society’s annual conference of the Division of Occupational Psychology in Liverpool.

According to a statement from the society, people working under a boss showing psychopathic or narcissistic personality traits are more likely to behave poorly at work themselves, in addition to feeling more depressed because of the “bullying behavior.”

A total of 1,200 workers from various industries and countries filled in questionnaires about their psychological wellbeing, their bosses’ personalities, and their workplace environment.

The British Psychological Society said the researchers analyzed those answers, and found that people who worked for managers with the psychopathic or narcissistic traits were less satisfied with their jobs and were more depressed than the others.

In addition, their workplace had more incidents of “counterproductive work behaviour and workplace bullying.”

Lead researcher Abigail Phillips said in the statement that “workplace bullying is obviously unpleasant for the target but also creates a toxic working environment for all involved.”