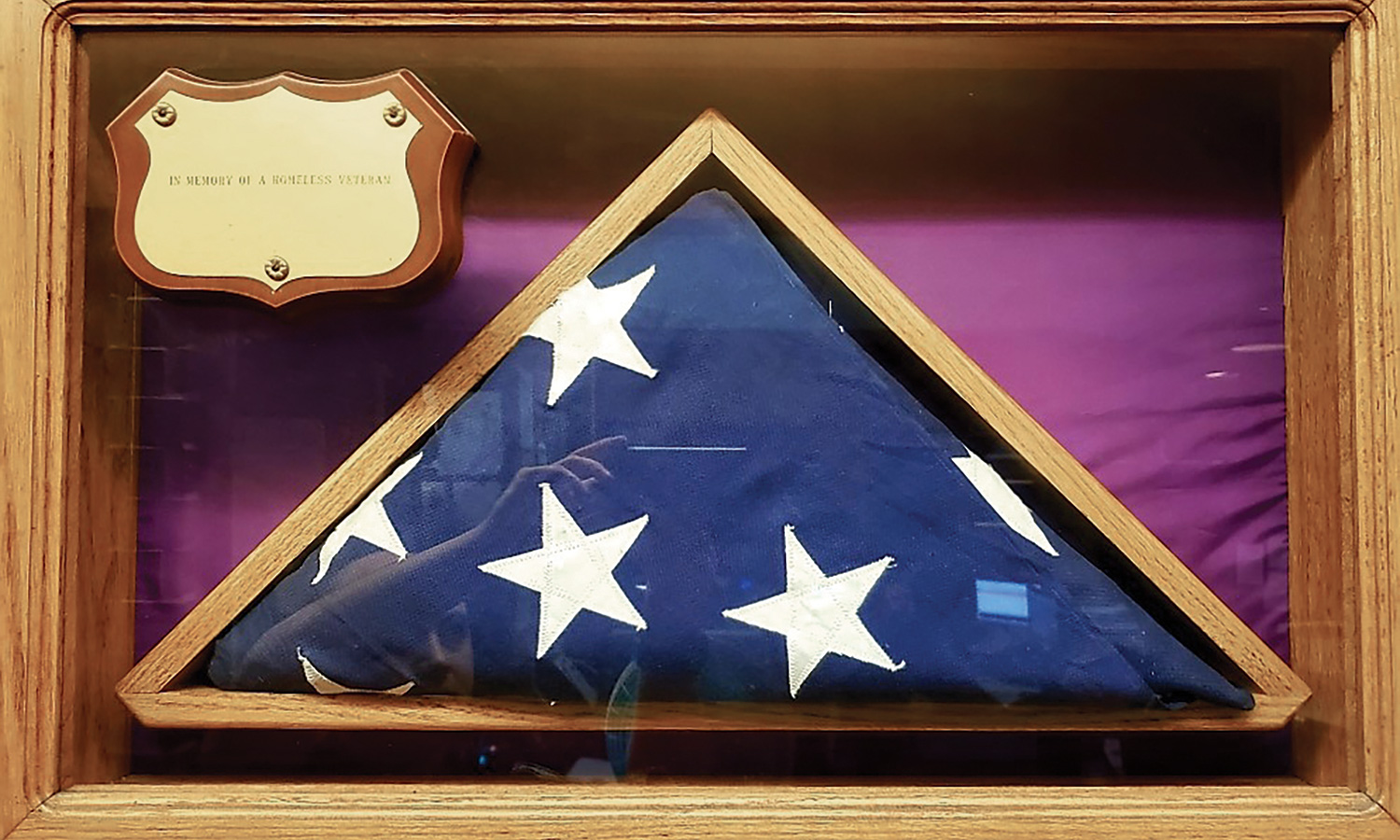 A cop connects with a story of heartbreak and heroism

In the 1980s and early ’90s, the Port Authority Bus Terminal on midtown Manhattan’s west side was ground zero for the era’s crack epidemic, crime and homelessness. The world’s busiest bus terminal, it offered a daily reminder of the lawlessness and social decay that infected the nation’s largest city at a time when New York recorded more than 2,000 homicides annually. The vast landscape between 40th and 42nd streets and Eighth and Ninth avenues was where commuters in business attire, bathed in perfumes and colognes — the Haves — arrived from New Jersey’s leafy bedroom communities to begin their daily, blinders-on dash to avoid the bus terminal residents, the Have-Nots. It was said that if you wanted to give New York City an enema, you would need to insert it in 42 and 8.

The Have-Nots were from all walks of life, each with a backstory — some of astonishing experiences and accomplishments. Many were United States military veterans.

I met Jack early on in my time as a Port Authority cop assigned to the BT, as the bus terminal is known to cops. Like most homeless people, he eschewed the city’s shelters as violent, hopeless hellholes, preferring the heavily policed bus terminal with its public bathrooms, food establishments — not that people like Jack ate at these, but they did avail themselves of the ample foodstuffs tossed in the garbage daily — and the parallel universe of a labyrinth of non-public stairwells populated by characters more akin to those in the Star Wars cantina on Tatooine than your daily commuter. However, some commuters, through misfortune, addiction or deviant desire, found themselves wandering this black hole, only to be ingested into a life they never imagined.

The 97 cops of the Port Authority Police Department BT Command left the station house each tour to confront the crime, social dysfunction and personal failures permeating the bus terminal. Some might have referred to this type of patrol as confrontational policing, but there was no other way to do it. The worse of the Have-Nots, often known in the cop vernacular as Skels, became the public face of the BT — a community not even earning disbelieving stares from commuters, yet one the BT cops called theirs. And, as cops do everywhere, they got to know their community and tried to serve it as best they could.

Jack was a World War II Navy veteran, somewhat senior to the average homeless vets in the bus terminal, many of whom were veterans of the Vietnam War. By some accounts, the daily homeless population of the terminal during the ’80s and early ’90s at times exceeded 1,500 people. The percentage that were veterans was not known, but it is safe to say that many were.

Cops deal with a wide variety of people, including some types the average person could never imagine being associated with. Yet there are those who, for whatever reason, endear themselves to cops no matter how society views them.

Jack was a cantankerous, vile, filthy human being who lived in an alcoholic haze. He panhandled to buy cheap booze that his body, festering with sores, used to maintain a blood alcohol level to erase his haunting, painful memories. There was, though, something about him that I had a soft spot for. I think cops understand that.

Getting to know Jack, I learned he did a stint in a New Jersey state prison after being convicted of manslaughter. I never knew the entire story, but from what I was able to understand through his rantings, his conviction was from an altercation resulting in a family member’s death while Jack was defending his wife. Up to that point, Jack was the typical World War II veteran who married upon returning from the war, moved to the suburbs, bought a house, raised a family and secured a good job. He was an operating engineer when his world fell apart. He became estranged from his family, falling to homelessness and alcoholism when released from prison. With no family or financial support, Jack ran from his past; the bus terminal became his home.

Asking for identification from a homeless person can often be fruitless, but interestingly, the one item most homeless veterans possessed was their DD214 form, a document issued upon separation from the military with a brief record of service. Because the form went through many iterations over the years, the World War II veteran form was titled differently, but it had similar information. One day when I was trying to arrange medical assistance for Jack, he shoved his military separation paper at me. I noticed he served on a United States Navy destroyer escort, a smaller destroyer-type warship used to escort merchant ships through U-boat Alley in the North Atlantic during World War II. The merchant ships, transporting supplies for the war effort to Europe, were easy prey for German submarines and required heavily armed ships for protection. Jack, as always, was in a drunken stupor, but I mentioned to him that my father served on a destroyer escort in the North Atlantic. Though it was difficult to follow him through his alcohol-induced mumblings, I did catch that Jack served in the North Atlantic. I told Jack my father’s ship was torpedoed, with my father among the survivors. Jack just looked at me and retreated into himself before being taken away in an ambulance.

I only saw Jack one other time after that, but I continued to wonder if Jack and my father served on the same ship. Some months prior, a drunk driver had taken my father’s life, so my only way of finding out if they served together was from Jack.

One evening I was on Eighth Avenue, crossing 41st Street, and saw Jack sitting on the sidewalk against the bus terminal building. He didn’t look well and I told him so. I wanted him to go to the hospital, but he told me, “Go f—k yourself,” a typical Jack response. A radio job sent me to another location for the rest of the night. The following day in the locker room, a cop who had been an academy classmate of mine told me Jack had died the previous night. A cop deals with death frequently, shakes it off and goes on to the next job. That’s just the way it is, but Jack’s death bothered me. Maybe it was because of the unfinished business of not knowing if he served with my father.

My main concern was that Jack deserved to be buried in a veterans cemetery, not a potter’s field. I contacted the Medical Examiner’s Office and told them the story. The M.E. agreed to hold Jack’s body for longer than the normal period, to give us the time to try to locate family and arrange a proper veteran funeral.

Often the stars align. The family of the cop who told me of Jack’s death owned a funeral home. They donated their services and arranged for burial in Calverton National Cemetery on Long Island, New York, the same cemetery where my father is buried. Without much information about Jack, it was questionable whether his family could be located, a job successfully pursued and completed by the Port Authority Police BT Detective Squad.

I contacted Jack’s daughter, but my timing could not have been worse — it was the day of her daughter’s wedding. She did, though, tell me of their estrangement and the many years that had passed.

There were many Port Authority cops involved in trying to get Jack to his resting place, and because of them, we accomplished it. Once we were given the date of Jack’s internment, the cops let the homeless closest to him, most of them veterans, know of the arrangements. The cemetery, about 100 miles from midtown Manhattan, was not a likely journey Jack’s cohorts could make, but they did! Dale, a Vietnam vet, told me they all made their way to Jack’s burial. His internment in a national cemetery was complete with the pomp and honors deserved by one who honorably and courageously served our nation.

I could not attend Jack’s internment and, yes, the question of whether my father and Jack served together still weighed on my mind. Some time later, I visited the cemetery, a place I am very familiar with. In addition to my father, my brother (a Vietnam vet who died from Agent Orange exposure), my stepdad (a World War II and Korean War vet) and one of my father’s brothers (a World War II vet who served in the Pacific) are all buried there. Calverton is one of the nation’s busiest national cemeteries, with many, many sections. While there, I looked up Jack’s section and burial site. I was stunned to discover Jack is buried in the same section as my father. Though I am still not sure if they served together, in a way I did not expect, I think I found the answer.

While at the cemetery, I collected information to send to Jack’s daughter. I let her know what a beautiful, peaceful place Calverton is and hoped she would have the opportunity to visit.

Time passed, and one day I received a package at the BT station house containing a letter and an American flag. The letter, from Jack’s daughter, thanked us for taking care of Jack and went on to say she believed the flag, the one that covered Jack’s casket, deserved to be with the BT Command.

Jack’s flag was placed as received, folded imperfectly, in a wood case mounted on a station house wall alongside the desk. Folded imperfectly? Well, yes, it goes against protocol, but Jack was not a perfect being.

A small brass plaque attached to the case is simply inscribed, “In Memory of a Homeless Veteran.”